Why is the buoyant force on an object the same for two different observers? [closed] 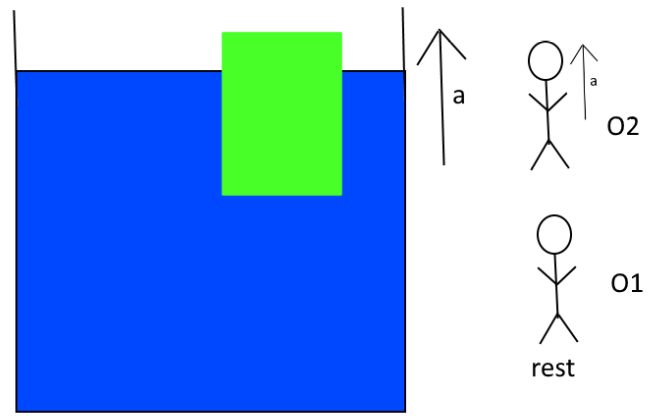 I believed that the buoyant force on the object should've been different for both the observers. I have detailed my thought process below.

Why is the buoyant force on the object same even for the two different observers?

The liquid is at rest according to $O_2$. To $O_1$ it is is accelerating upward. In an accelerating liquid, the hydrostatic approximation (that is, the relationship $p = \rho_l g h$) is not valid. For example, normally, if you release a buoy at the bottom of a bucket of water, it floats to the top. But if at the same time, you drop the bucket off a cliff, the buoy does not rise, but remains at the bottom of the bucket. Because the liquid is accelerating downward at $g$, it is essentially weightless, and produces no buoyancy force. $O_1$ experiences gravity of $g$, but sees the liquid accelerating upward at $a$, and so concludes that the buoyancy force is $\rho_l * (g + a) * V$, exactly the same as $O_2$. In retrospect, it is clear that both observers must report the same buoyancy force, because what it actually is is an integral of the pressure over the surface of the block, which should appear identical to both. For $O_1$, this buoyancy force is greater than the gravitational force ($m_{block} * g$), and the block accelerates upward. For $O_2$, the two forces are equal (effective gravity being greater for $O_2$) and the block does not accelerate.

4
Will buoyant force change if the container is accelerated up or down?

2
Time to immerse in a fluid
2
What is the buoyant and viscous force acting on a ball in free fall?
6
What is the basic reason behind buoyancy?
0
Why isn't the apparent weight of a body in a fluid equal to the buoyant force? Why does buoyancy reduce it instead?
2
A conceptual propulsion device based on instantaneous energy transfer of relativistic mass
1
Change of buoyant force as object moves deeper
5
Pseudo Force and Inertial and Non-Inertial frames