If a current loop falls through a uniform magnetic field - is there a voltage induced?

Say we drop a current loop into a uniform magnetic field. As long as only on side of the loop is in the field, the magnetic flux through the loop is increasing and we hence have an induced voltage. The direction of the voltage is such, that the current it gives rise to results in a net force pointing upwards - working against the fall according to Lenz's law. This far this good.

However, what happens when the top end of the loop enters the field? By symmetry the current running in this branch will give a force pointing downwards, cancelling the one from the bottom. Hence, I believe the loop will be in simple free fall. But is there still a voltage induced?

The flux through the loop is not changing, but it is still "cutting lines of flux" which is often the argument used about Faraday's disk - a disk simply rotating in a uniform field and having an induced voltage. If there is a voltage induced in the falling loop too - how does that comply with energy conservation?

One way of thinking of the system is to consider the top nad bottom of the loop separately. 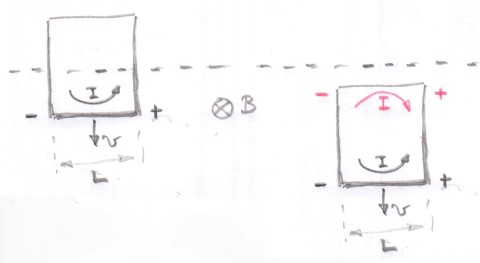 In terms of energy changes in the first case there is a current flowing through the loop and so ohmic heating occurs which comes at the expense of a loss of either kinetic energy or (gravitational) potential energy of the loop whereas in the second case there is no such transformation of energy.