Double Slit Experiment. What effect does the detector actually cause?

If a detector is placed at one of the slits and the duality is detected at either of the two slits the detected duality proceeds to and arrives at the second screen as a photon/particle that has 'emerged' from its electromagnetic wave.

Therefore can one assume that detection has 'caused' the collapse of the wave portion of the duality?

How has detection precisely influenced the duality? Can anyone clarify?

This is not correct. The photons arrive one at a time whole, not split in space. In any case, in quantum mechanics what is waving is the probability of detecting the particle not the particle itself.

Here is the double slit experiment displaying one photon (quantum of light) at a time, and what happens when many photons are accumulated.

At the frame on the far left the footprints of the individual photons are seen. The photons do not leave a signal all over the place, they hit at a specific (x,y)at a distance z, according to the probability of the solution for the setup "photons scattering off two slits with specific width and distance". This probability is given by the $Ψ*Ψ$ of the specific wavefunction and it looks random in the first frame on the left.

The accumulation of photons shows the classical interference pattern, which for the quantum level means the probability distribution $Ψ*Ψ$.

A detector after one of the slits intercepting the photon, changes the boundary conditions to a different system, and thus a different $Ψ*Ψ$. It is no longer the same experimental setup. It should be obvious that if the detecting instrument after the slit , absorbs the photon like the screen does, only the untouched slit will give a signal on the far screen, which could not interfere with itself .( A sophisticated experiment with electrons which tries to minimally show the effect came to the conclusion that the detecting level acts as a point source for the electrons going through it, i.e. a different $Ψ*Ψ$ for the electron which is no longer coherent so as to show the interference pattern.)

Therefore can one assume that detection has 'caused' the collapse of the wave portion of the duality?

Detection at the screen has picked ("collapsed ")an instance of (x,y,z) of the original wavefunction and removed that photon from the final screen. In general after the detection of "which slit" the photons are in a different wave function with new boundary conditions.

How has detection precisely influenced the duality? Can anyone clarify?

The duality is not affected by detection, the mathematical model that describes the probabilities , $Ψ*Ψ$, has a different Ψ because the boundary conditions have changed and the coherence necessary to display interference is lost.(coherence in the phases describing the photons in spacetime). Again, the term wave particle duality has to do with the mathematics of the quantum mechanical probabilities. The probability is a wave, (a solution of a quantum mechanical system) the particle manifests as a point in (x,y,z,t) when interacting in a measurement, in accumulation of many particles with the same boundary conditions, the probability distribution is built up.(It is the same as throwing dice. The probability distribution versus the numbers 1-6 is seen in the accumulation of many throws).

A few weeks ago, I had a paper to do about why the interference patterns disappears when you place a detector to determine through which slit a photon passes through. This gave me a pretty good idea of what's going on, and answered some of these questions that I was asking myself actually. As this paper was in french, I'll try my best summing up what I understood, in english.

If we consider a beam of light directed to 2 slits and on the other side of the slits, a screen mounted on 2 oscillators (that's our detector), like so: 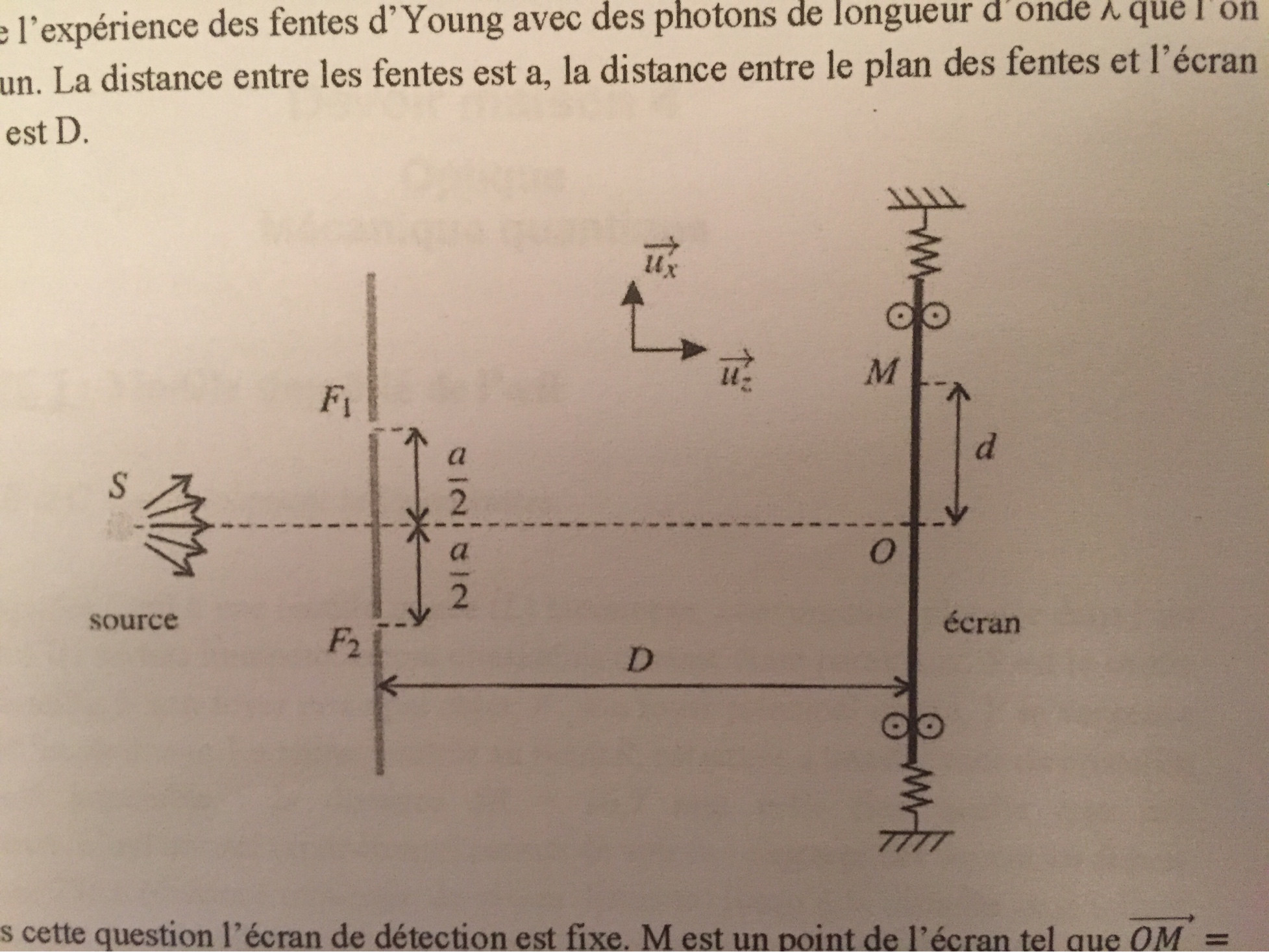 First let's consider that the screen is stated. You don't make any measurements so what you see is a simple interference pattern with distinguishable rays, and without demonstrating it (it would take too long) we have: 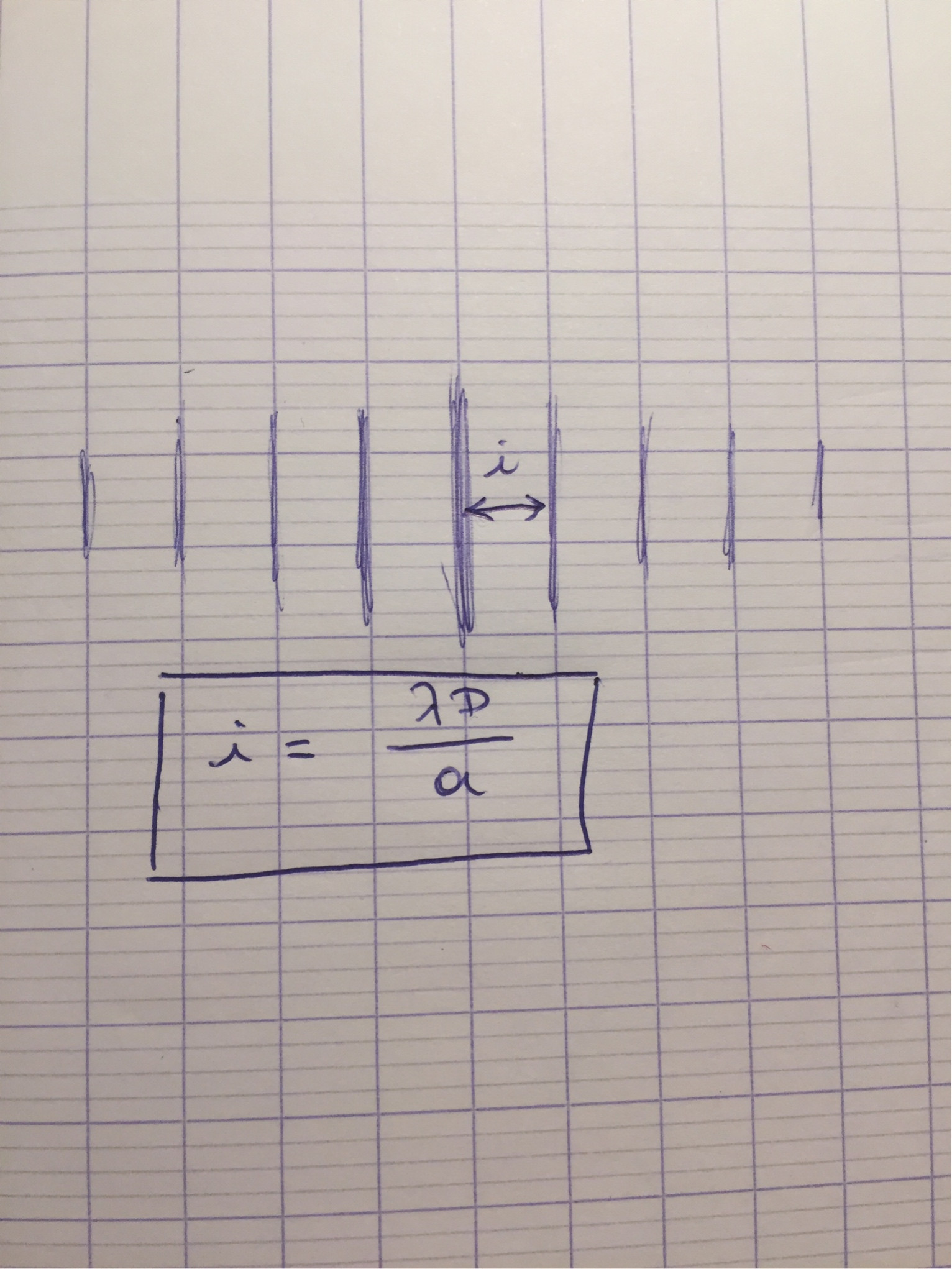 This phenomenon is proper to waves.

Secondly, we make a measurements, which means the screen can now oscillate and inform us about a photon's momentum (px): 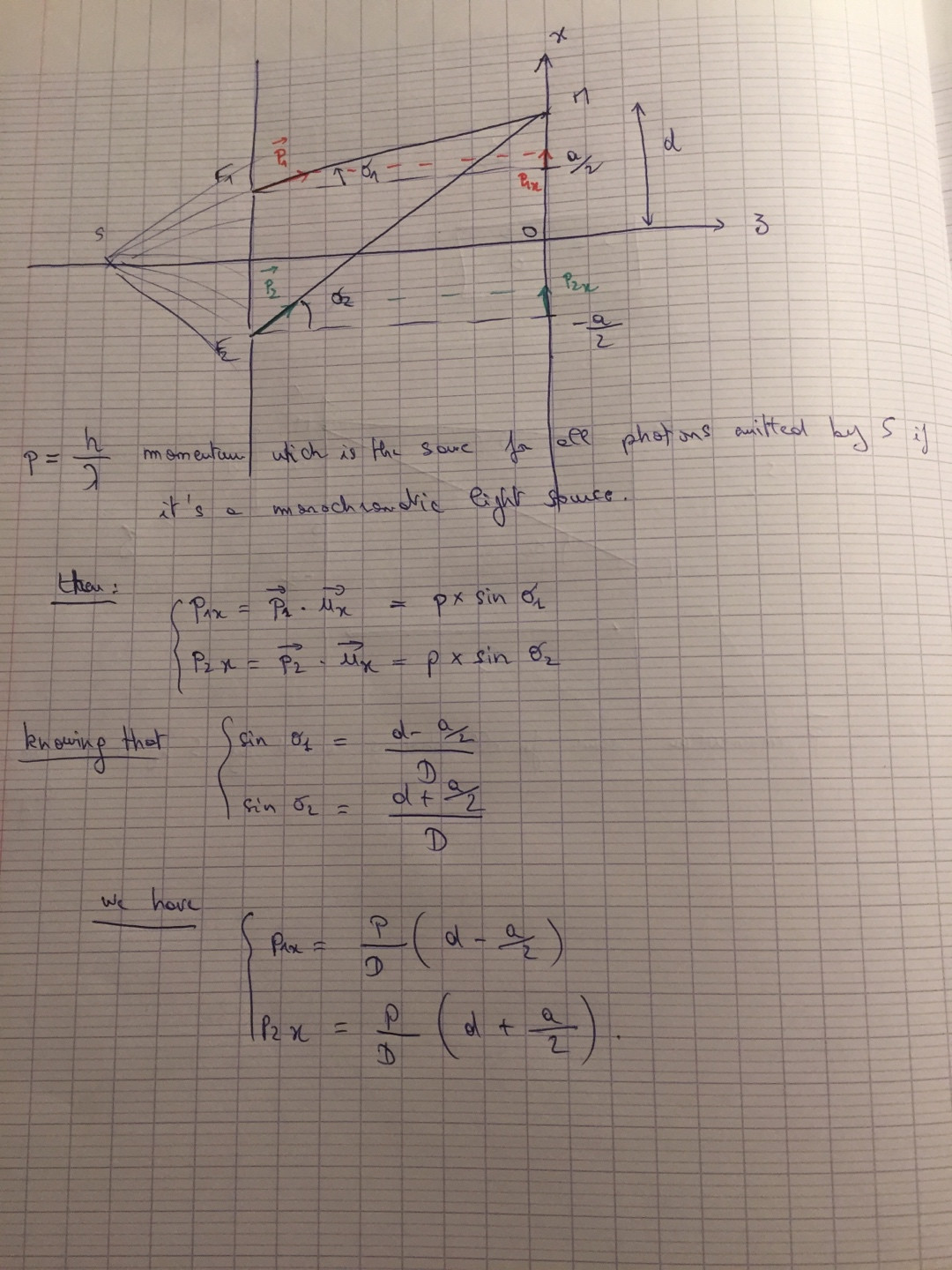 So, to be able to know from which slit a photon originated from, we must know if it corresponds to p1x or p2x: 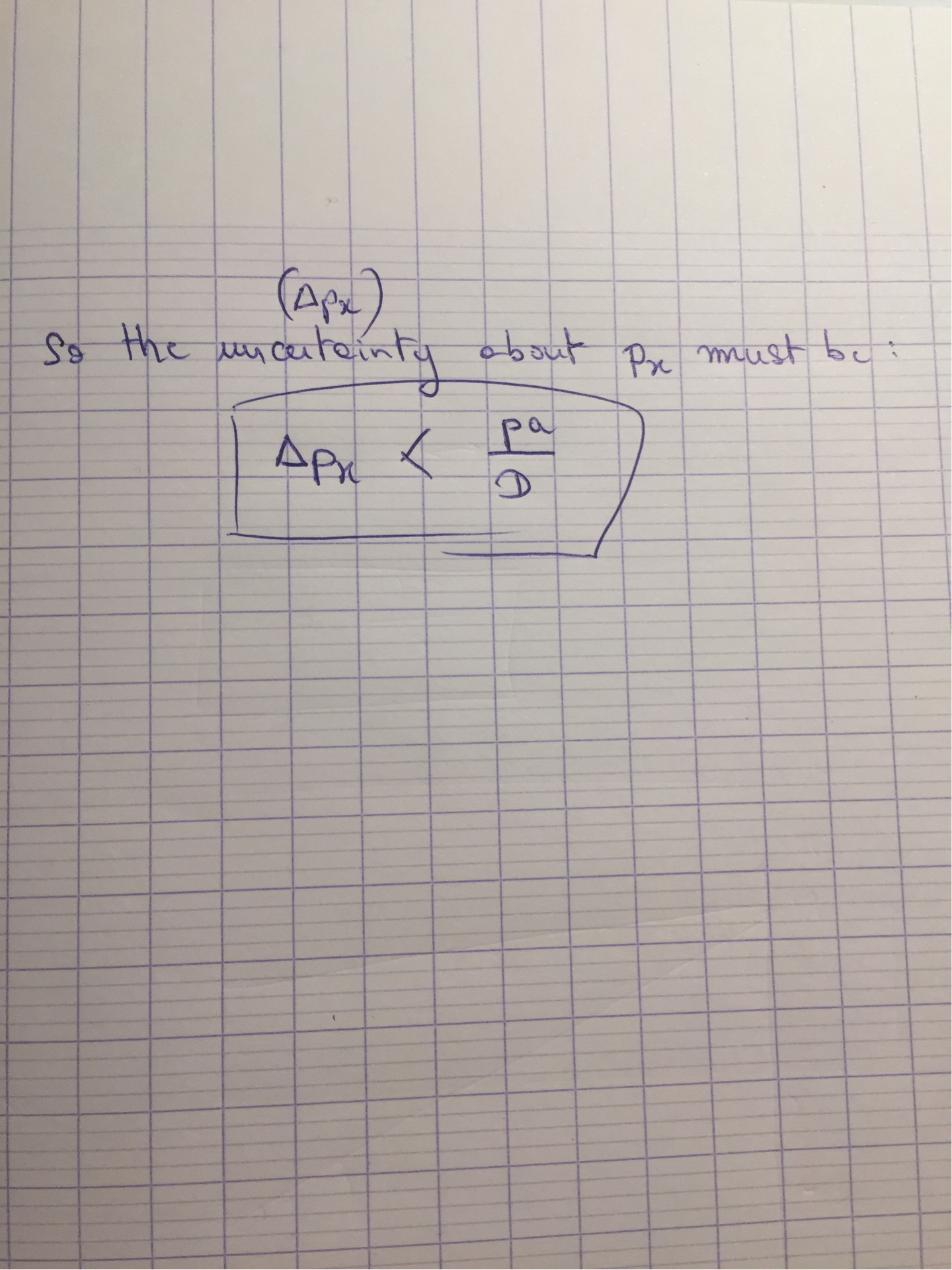 And I'm sure you've heard about Heinsenberg uncertainty principle which gives us the following inequality: 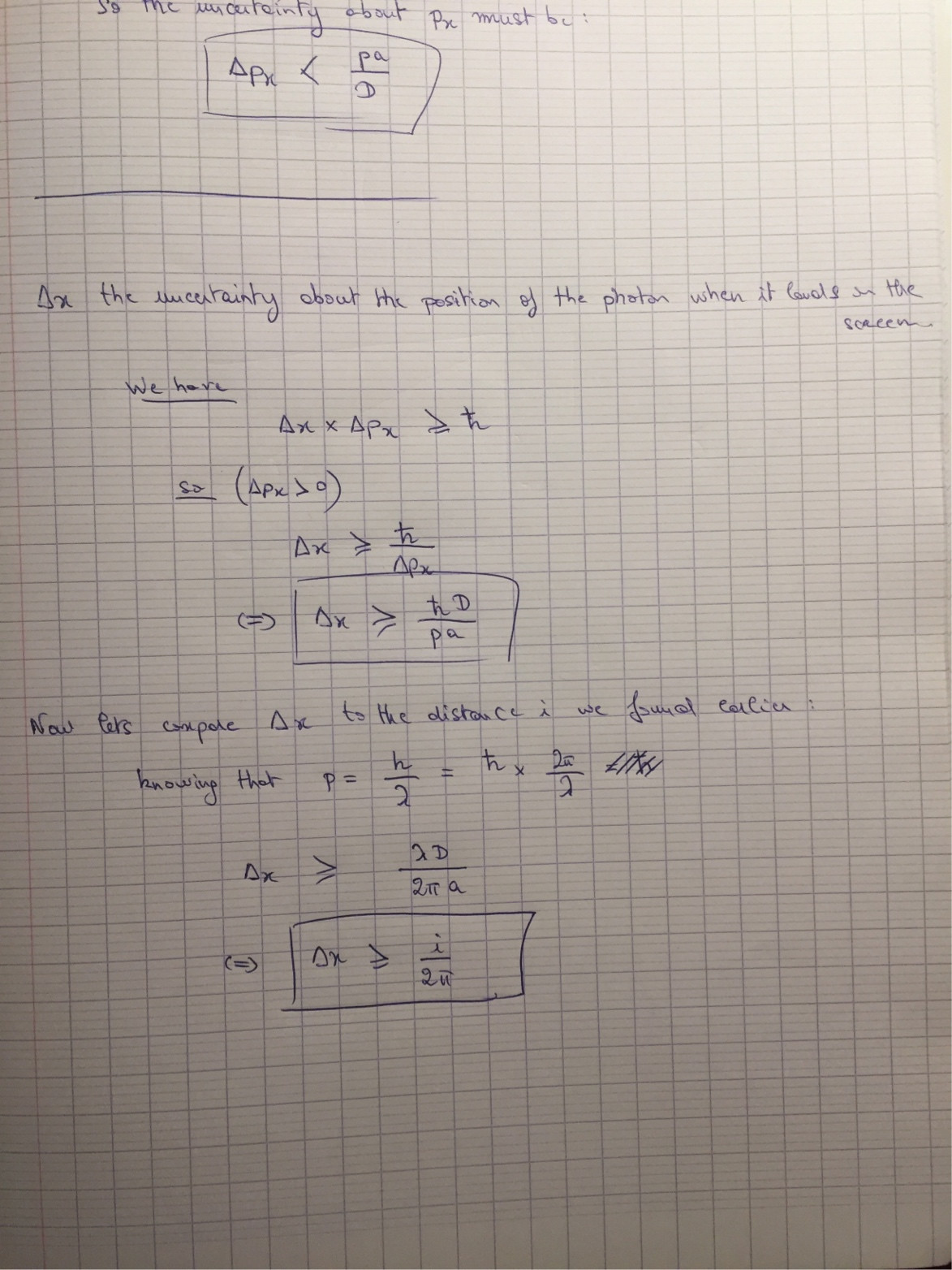 We notice that delta X has the same order of magnitude then the distance between 2 rays! Which means we can't see an interference pattern distinctly anymore! Knowing that the interference pattern is proper to waves, we can say that light no longer has the property of a wave and behaves like a particule!

This is called the complementarity principle: we can't see light behaving like a wave and a particule at the same time.

I hope this helped don't hesitate if you have any questions :-)

"A detector after one of the slits intercepting the photon, changes the boundary conditions to a different system, and thus a different Ψ∗Ψ. It is no longer the same experimental setup."

Anna: You appear to be suggesting that a detector will interact with the photon in a classical sense, as it "intercepts" the photon. Can you clarify what experimental conditions have been changed by detection. When you refer to 'boundary conditions', what do you mean? My understanding is that a detector does not interact with the quantum in any material way that might affect its behaviour.

Therefore can I assume that the "boundary conditions" that you refer to, lie outside of the experimental construct and are themselves hypothetical?

What could you observe and what should you interpret?

What could you observe

But you are curious and remove one of the slits and later you replace the slit by a sharp edge. In all cases you could observe an intensity distribution (fringes) behind the obstacle: 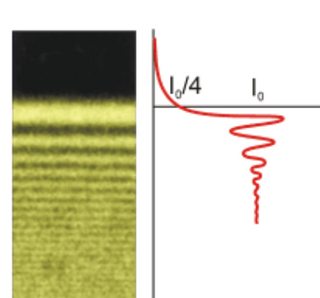 What should you interpret?

Young concluded that a beam of light, going through two slits, works like a water wave interference (from Wikipedia):

That is a simplified interpretation because any water wave interference produces a moving interference pattern which is not the case for the intensity pattern from light or even electrons.

Furthermore behind an edge water waves get bended but not have interference pattern.

The influence of the edges

If even for single thrown photons after some time an intensity distribution occurs, haven’t we to ask about the influence of the edges? On the edges surface electrons are concentrated, do they interact with the photons?

If a detector is placed at one of the slits and the duality is detected at either of the two slits the detected duality proceeds to and arrives at the second screen as a photon/particle that has 'emerged' from its electromagnetic wave.

If a detector is placed at one slit, a particle could be detected in approximately 50% of the cases. Does this support Young’s point of view about the wave nature of light or does it support the point of view that photons still are quanta under the influence of the edges?

Not the answer you're looking for? Browse other questions tagged quantum-mechanics double-slit-experiment measurement-problem observers wave-particle-duality or ask your own question.

196
If photons have no mass, how can they have momentum?
12
The maximum distance for which Coulomb's law has been verified?
4
Are double-slit patterns really due to wave-like interference?
6
Does the observer or the camera collapse the wave function in the double slit experiment?
3
Double slit experiment - what defines the distance between slits
3
What is the physical reasoning behind the mathematical derivation of double-slit interference pattern and single-slit diffraction pattern?
0
Does the mass of photon affect its size or vice-versa?
0
Detecting collapse using single slit
1
Lasers, Why doesn’t a photon go through the same slit every time?
0
When does a particle in a quantum state interact with matter?
See more linked questions