Linear, homogenous and isotropic dielectric in electrostatic field. Why do I consider two potentials (inside & outside sphere)?

Presentation of the problem :

We have a uniform homogenous isotropic dielectric sphere in an electrostatic field. 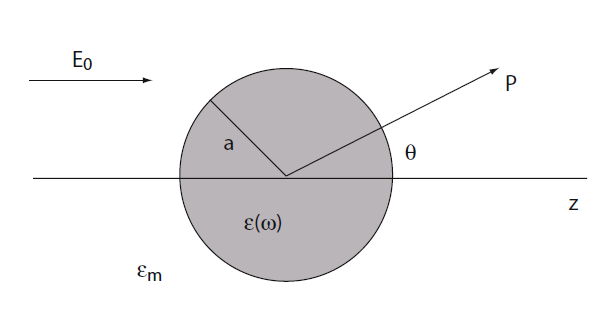 To solve this problem, we remark that we have an azimuthal symmetry. So the potential of the problem is $V(r, \theta)$.

Because we are in homogenous isotropic dielectric medium, we have a Laplace equation for the potential inside and outside of this sphere:

By assuming $V=f(r)g(\theta)$, we end up by a potential of the following form:

This solution is done in Plasmonic fundamentals by Stefan Alexander Maier. The image is taken from it.

The moment I don't totally understand is that they say we decompose the potential in two contributions: $V_{in}$ inside the sphere and $V_{out}$ outside.

Then they say that as the potential can't diverge in $r=0$, we have:

What I don't understand is: how do we know we have to write two contributions of the potential.

But of course it would be wrong (not enough "unknown to solve").

But I don't see from a math point of view why I should write two different potentials. Indeed, the potential $V$ is following the same equation $\Delta V=0$ inside and outside of the sphere so how can I know I have to write it in two different ways $V_{in}$ and $V_{out}$ ?

A common expansion would produce a smooth function everywhere in space since harmonic functions are real analytic. Instead we know that the potential is only continuous (with some derivatives) through the surface of the sphere (where a superficial density of charge is present). For this reason it is more convenient to separate the space into two open regions where the potential is assumed to be smooth with two different expansions (removing some terms in the internal region to avoid singularities at the origin) and finally gluing the two solutions imposing some condition on the common boundary.

Not the answer you're looking for? Browse other questions tagged electrostatics potential boundary-conditions dielectric multipole-expansion or ask your own question.

5
Potential generated by a hollow sphere with a hole
0
Confused about a question about a dielectric sphere
2
Choosing $A_l=0$ to guarantee bounded potential in infinity
3
Can I use method of images for a point charge outside a solid dielectric sphere?
0
Separation of variables and choosing solutions
1
Laplace Equation of a Charged Conductive Sphere in an External Uniform Electric Field