So I've seen a number of answers/questions pointing out that massive objects which aren't black holes don't emit Hawking radiation. This certainly seems right for the steady state case with a time invariant gravitational field.

However, what happens as a star starts collapsing into a black-hold before any actual event horizon is realized? Does the changing gravitational field somehow create a net flow of radiation out of the collapsing region?

Or to put the point differently is gravitational collapse (whether or not into a blackhole) slowed ever so slightly by a Hawking radiation style effect?

Or to put the point differently is gravitational collapse (whether or not into a blackhole) slowed ever so slightly by a Hawking radiation style effect?

Gravitational collapse certainly emits gravitational waves, by the form of the equations. Now when considering quantum mechanical effects, one has to assume a quantization of gravity with its consequent graviton content of the waves. Thus one can think of a Feynman diagram 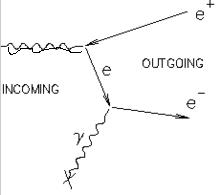 Where a graviton from the collapse on the top left, has enough energy to go to an e+e- pair that interacts electromagnetically with the masses ( to raise the probabilities). But there is no reason, as with Havking radiation, to assume that one of the pair has to go into the collapse. It will depend on the particular boundary conditions at the moment of the interaction, how probable it is for both to leave or both to be consumed in the disturbance. It is a different mechanism than Hawking.

The argument would hold if we assume there is no incoming graviton in the diagram, but a virtual graviton interacts with an e+e- vacuum virtual loop.

Now as there is no horizon , black body radiation will be going out in all directions collapse or no collapse. Again it will not be called Hawking. It is the special existence of the horizon that defines Hawking radiation.The theoretical treatment is a combination of thermodynamics with field theoretical assumptions at the microscopic level, and that is the exposition in this wiki article.

As any radiation reduces the mass of the interacting stars ever so slightly, the answer is yes, the will be a tiny effect in the process of collapse.

A partial answer (seemingly yes) is suggested by the comments on this question. I would have marked my question as a duplicate but no one has actually answered that question just given a few comments.

Not the answer you're looking for? Browse other questions tagged hawking-radiation or ask your own question.