In Wikipedia's description of the Observer Effect wrt particle physics, we have this:-

For an electron to become detectable, a photon must first interact with it, and this interaction will inevitably change the path of that electron.

Surely a photon is not the only way to detect an electron. Photon emission means that we might actually see the electron's presence (with a magnifying glass or something). But electrons have charge and interact with other charged thingies, so they could be detected indirectly through other means couldn't they? And that's not even getting into detection via the electron's mass or momentum.

Is this just an example of sloppy language, or are photons always involved even if electrons interact with other +/- charges?

The language is sloppy, but the sentence right after the one you cited actually does mention: "It is also possible for other, less direct means of measurement to affect the electron." The idea the article is trying to get at is that detection requires interaction, and interaction means changing some properties of the object you are trying to detect.

It is correct for the mathematical models used in particle physics studies. Because the electron interacts electromagnetically, and there are not only the real photons but also the virtual photons

which transfer the momentum and the quantum numbers in the interaction described by integrals over the variables. So conceptually there is always a photon intermediary in any everyday interaction of an electron. ( it also interacts with the weak and the gravitational but these are very weak effects, outside our measuring capabilities). An electron interacting with an electron , (when we touch something for example it is all electron interactions,) will exchange a virtual photon as in the diagram above. 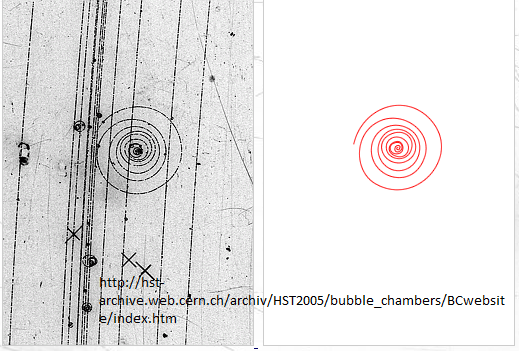 A virtual photon is involved in the "strike" , and a multitude of virtual photons kick off the electron from hydrogen atoms, little energy is lost in each hit because the ionisation energy of hydrogen is ~13eV and the electron has some hundreds of keV, these create the small bubbles of the path.

"it is all photons , all the way down"

spoof from " it is all turtles , all the way down"

Not the answer you're looking for? Browse other questions tagged photons electrons quantum-electrodynamics .

27
Virtual photon description of B and E fields

1
Collision between a photon and an electron
10
How does gamma-gamma pair production really work?
5
Does a single white photon exist?
3
Bremsstrahlung emissions of an electron dependent on electron energy?
0
An intuitive reason why (classicaly) a free electron can't emit a photon
0
Does a relaxing electron really accelerate?
50
How can an object absorb so many wavelengths, if their energies must match an energy level transition of an electron?
0
Is the interaction of the electron w/ a photon in the double-slit experiment simply distorts the experience & not the consciousness of the observer?
1
Why do we take the quantization of forces so seriously even though the particles mediating the forces are not even real particles as per our theories?