Why does a photon crossing a beamsplitter end up in a coherent superposition? [duplicate]

A single photon, passing through a beamsplitter (BS), ends up in the state $\frac{1}{\sqrt2}(a_1^\dagger + a_2^\dagger)\lvert\operatorname{vac}\rangle$, which is a coherent superposition of the two possible spatial modes. Let us consider its momentum. 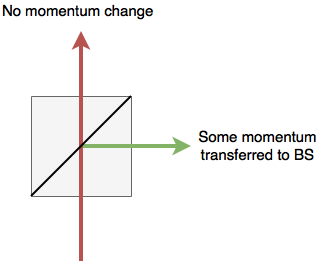 Because the photon ends up in a superposition of the two output modes, the complete output state must be something of the form: $$ \frac{1}{\sqrt2} \Big(\lvert\text{photon up}\rangle\lvert\text{BS steady}\rangle+\lvert\text{photon right}\rangle\lvert\text{BS momentum changed}\rangle \Big).$$ However, we do not care about the final state of the BS, so that the final state of the photon will be obtained by partial tracing over the BS degree of freedom.

Now, we know very well that this is not actually the case, as the fact that the photon does end up in a coherent superposition is easily tested and well enstablished. So what did we get wrong? The only logical conclusion (that I can see) is that $\lvert\text{BS steady}\rangle$ and $\lvert\text{BS momentum changed}\rangle$ are not orthogonal states, so that partial tracing does not lead to a totally mixed state for the photon.

So here comes the question: why are the two final states of the BS not orthogonal? Is there a clean way to see this?

46
Why doesn't a typical beam splitter cause a photon to decohere?
33
Why can interaction with a macroscopic apparatus, such as a Stern-Gerlach machine, sometimes not cause a measurement?

9
Output of a beamsplitter with photon number (Fock) state inputs
2
Chance of distinguishing between many pure states
2
What is the output state of a photon after evolution through a polarizing beam splitter?
2
which is the state if I add a photon to a coherent state of the light?
2
Operator-sum representation of a quantum operation with different input and output spaces
0
What is the main requirement for two arbitrary quantum states to be able to serve as qubit states?
1
Matrix representation of beamsplitter, for numerical computation of output based on given photon number (Fock state) input
6
In what sense are spin coherent states “classical”?
0
How to distinguish between no state and the state with zero photon?
9
Why is laser light described by a coherent state?