Why is Earth's magnetic field so stable?

This answer explains why the Earth has a magnetic field, this answer explains why the Earth's magnetic field flips. However, neither seems to answer the question of why the Earth's magnetic field flips only after very long periods of time, or why, instead of flipping, it does not simply change direction. The second answer, from my understanding, seems to imply that the currents create a chaotic system, and even a small change may flip the polarity. If that is true, why doesn't it happen much more frequently? Why doesn't the polarity simply change direction rather than flipping? Why is the intensity (as far as I know) also stable?

(P.S. I understand there are variations in the intensity and also in the location of the poles that are currently travelling about 64Km per year, but that seems small and also quite regular, not what you would expect to be the result of a chaotic system).

Short answer: Planetary rotation establishes a preferential magnetic axis, and the field displays its instability in geological time scales, so it only seems stable.

There's a wide variety (see this and this reviews) of magnetohydrodynamical models (with different assumptions, parameter ranges, boundary conditions, etc.) that successfully describe main characteristics of Earth's magnetic field dynamics. This fact suggests that only a small number of fundamental ingredients is needed to describe this dynamics, which puts it within reach of low-dimensional models. And, as the polarity reversals are strongly non-periodic and the flows expected to be turbulent, these models likely need to be chaotic.

That said, even if these models capture fundamental aspects of the relevant dynamics (they do fit the available measurements), they cannot fully reflect the complex flow underneath Earth's crust $-$ so they may be used to investigate major features of the dynamics, but probably not finer details.

Suppose we have a situation without flips, where either polarity is possible, but (completely) stable, i.e., there are no flips. In the lingo of chaos theory, that's described as the system having two attractors, which we can visualize as two separate blobs in phase space.

Now consider that, as a parameter is shifted, these two attractors can somehow merge, but only slightly, through a narrow bridge: a trajectory will move from one blob to the other with a frequency that's proportional to the effective width of this bridge. That's a way you can have long waiting times between the flips. 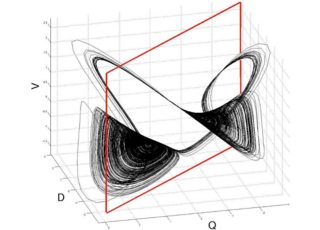 currently travelling about 64Km per year, but that seems small and also quite regular, not what you would expect to be the result of a chaotic system

As the picture above suggests, even if the times when the curve (trajectory) changes from one roll to the other are unpredictable, the overall movement, especially between changes is very smooth and approximately regular. It's a similar situation to the Solar system, which is chaotic, but whose short-time behavior is mostly pretty predictable.

why, instead of flipping, it does not simply change direction

Large scale flows in the planet are coupled to its rotation by the Coriolis effect, which "tends to organize the flow into rolls aligned along the north-south polar axis" (Wikipedia). Even if the flow is chaotic, the Coriolis effect is likely to remain a relevant influence.

Why is the intensity (as far as I know) also stable?

Not the answer you're looking for? Browse other questions tagged magnetic-fields earth geophysics chaos-theory or ask your own question.