Discuss whether this statement is correct: “In the absence of air resistance, the trajectory of a projectile thrown near the earth’s surface is an ellipse, not a parabola.”

Is the above statement right?

To the best of my knowledge, a particle projected from the earth's surface follows a parabolic trajectory under constant acceleration (of course an approximation)

One of my friends pointed out that in case of variable acceleration, one which follows the inverse square law; the path is an ellipse.

So, what is correct? If it is indeed an ellipse, I'm having trouble deriving the equation of its trajectory. Could someone please post a solution, or method to derive the actual trajectory's equation?

P.S. If the parabolic trajectory is an approximation, then making appropriate changes in the equation obtained should yield a parabola's equation, right?

A parabola and an ellipse are both conic sections, which can be constructed in a plane as all the points where the distances from some reference point (the "focus") and some reference line (the "directrix") have some ratio $e$ (the "eccentricity"). An ellipse has $0<e<1$ a parabola has $e=1$.

In a typical intro physics "Billy throws a baseball"-type problem, the distance between the focus and the directrix for the "parabolic" trajectory might be a few meters. If the trajectory is secretly an ellipse due to Earth's gravity, Kepler's Laws predict that the other focus of the ellipse is the Earth's center of mass, and symmetry requires the path goes only a few meters from that point as well. That means we can estimate the eccentricity directly. Using the standard notation, 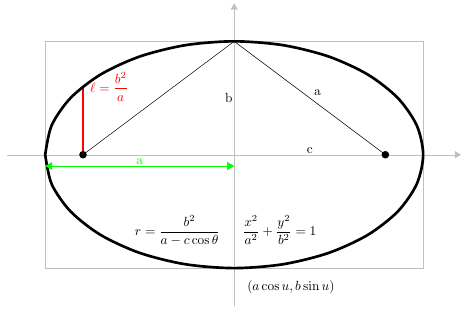 That's a very good approximation of a parabola. That also suggests that if you wanted to worry about the difference between a parabolic path and an elliptical path at the part-per-thousand level, you'd start to worry about paths where the distance between the path and the focus (or equivalently, for scaling purposes, the distance between the launching and landing points for your projectile) of a few kilometers or tens of kilometers. Which is, in fact, where you start to hear about people taking into account Earth's curvature in engineering projects --- for example a very long suspension bridge, where the towers cannot be both "all vertical" and "all parallel."

If gravity is uniform - the force has the same magnitude and direction everywhere, the trajectory is a parabola. This is a very good approximation for trajectories that don't go very far.

But in fact the force is not perfectly uniform. It actually does point to the center of the earth. It is stronger nearer the center. The trajectory for this case is an ellipse.

A typical parabolic trajectory hits the ground before it gets very far. If it didn't, it would be a very long skinny ellipse.

A parabola is an infinitely long ellipse.

Edited to respond to comments.

The observer in space sees an observer on the ground moving sideways at the speed of the earth's surface. The ground observer is following a circular path. In those few seconds, he deviates from a straight line at $0.0042$ degrees/sec. To a good approximation, he is moving at uniform speed on a straight line. This gives the same result as if he wasn't moving.

If the rock fell through the earth and orbited, it would follow an ellipse as seen by the space observer. It would not be as skinny as I had thought. To the observer on earth, the motion would look complicated.

So thanks to Peter for pointing this out. 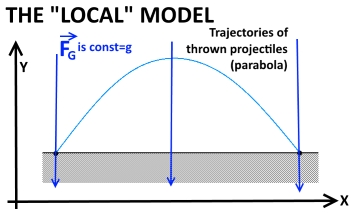 The key Point here is “…thrown near the earth’s surface…”.

With this 2 conditions we assume gravity as a constant force only acting on the vertical ($\rm y$) direction, or

Which is the parameterized form of a parabola with time $\rm t$ as parameter.

However, this is just the local view of the problem, meaning that you are just considering short distances when compared to earth’s radius. 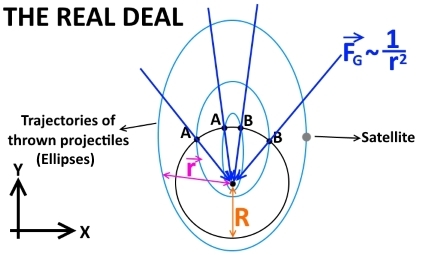 Considering that earth is a spherical object, it is possible to demonstrate that it’s gravitational force is equivalent to the gravity of a point mass located at it’s center. The trajectories of objects moving as the result of such forces obeys Kepler’s laws, replacing the sun by the center of the round object.

Kepler’s first law says that such trajectories are in fact ellipses (one could demonstrate it by solving Newton’s second law, but I won't bother if you do that ;-)

The big difference here is that gravity is not considered constant neither in magnitude (it is inversely proportional to the distance from the object to the center of earth) nor in direction (it point towards the center all the time).

Therefore, before continuing the discussion with your friend, please make sure you guys decide whether to consider “…thrown near the earth’s surface…” or not.

PS: by "thrown near the earth’s surface" I'm assuming you mean short distances and altitudes, sorry if I'm wrong.

When you see the usual claim that the path of a thrown object is a parabola in the absence of air resistance it is done with a flat earth and constant gravity. From those assumptions, you can derive that the path is a parabola. The difference between the ellipse and the parabola comes because the gravitational acceleration varies with distance from the center of the earth. Both are good approximations for reasonable speeds of throwing an object. At that level of approximation you can't tell the difference.

In Newtonian dynamics, orbits are conic sections like ellipses or parabolas in the correct gravitational field of a point mass. The orbit outside a spherically symmetric body is the same as the orbit around a point mass. If we regard the earth as spherically symmetric, as long as you can't throw an object with escape velocity the orbit will be elliptical, not parabolic. Note that we have two different parabolic trajectories in this discussion. One is parabolic in a coordinate system with flat ground and constant gravity. The other is parabolic relative to the CM of the earth and the projectile with proper Newtonian gravity. All that is required for a parabolic trajectory in the second is that the total energy be zero. The statement is true if 1) you assume the earth is spherically symmetric and 2) you can't throw an object with escape velocity. I would ask somebody making this statement to justify that the difference between the elliptical orbit and the flat ground constant acceleration parabola is greater than the error created by the asymmetries of the earth. I suspect that it is true, but it will be some work.

An object is "thrown out" from the International Space Station (which is "near" earth's surface and no air resistance). What is its trajectory? It should be obvious that it is elliptical. Therefore, the above quoted statement is correct.

Not the answer you're looking for? Browse other questions tagged newtonian-mechanics newtonian-gravity orbital-motion projectile approximations or ask your own question.

17
Why does the Earth follow an elliptical trajectory rather than a parabolic one?
8
Do the distances from directrix and focus in a parabola shaped trajectory have a physical meaning?
3
Can a very small portion of an ellipse be a parabola?
3
My question is about satellite motion and gravitation

3
Can a very small portion of an ellipse be a parabola?
11
Throwing a Football. Is it truly parabolic?
17
Why does the Earth follow an elliptical trajectory rather than a parabolic one?
1
Projectile, the focus of its parabolic path, and the circle drawn through the focus
2
Why is a projectile trajectory parabolic while that of a satellite elliptic?
0
Gravitational attraction as distance approaches zero
1
Is there an equation for the gravity of Earth that accounts for a comprehensive set of variables?