A classical electromagnetic wave is, according to quantum electrodynamics, an ensemble consisting of a large number of photons, which are the minimum excitation of the electromagnetic field for a given frequency.

An electron is, or at least that's how the people who know QED explain this to me, the minimum excitation of the electron field (for some reason in this field frequency doesn't seem to be an issue - why is that?) So, given a large number of electrons is some (relatively small) region we should be able to see macroscopic "electron waves" that emerge from a large number of electrons, the same way an electromagnetic wave emerges from a large number of photons, shouldn't we? Why don't we see such waves? Does this have to do with Pauli exclusion, or am I just messing stuff up?

For example, electron waves are seen all the time in Scanning Tunneling Microscopy in the form of Friedel oscillations around defects on material surfaces. The reason you don't see those waves by eye is that the have a very small wavelength (think Angstroms or nano-meters). The wavelength comes about because electrons usually have energies on the scale of Volts in solids, which translates to sub-nanometer wavelength $\lambda=\frac{h}{\sqrt{2mE}}$.

You can see the waves in the STM image below from IBM, along with a video where they move around defects to make a movie from the patterns. Each of the dots is an adsorbate atom, and the waves are ripples in the electron density.

Video is in the following link: 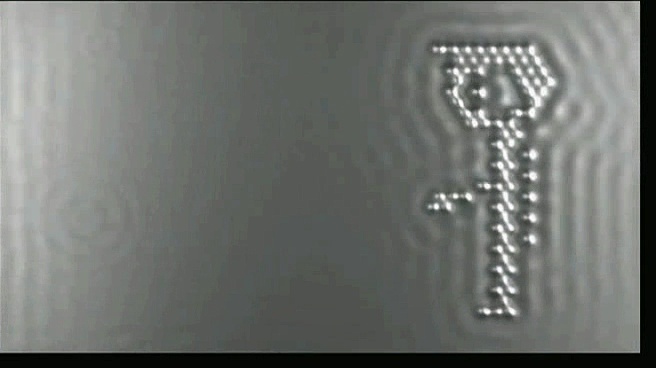 There are many reasons why we see macroscopic electromagnetic waves, but not electron waves of the same sort (i.e. free traveling in space). First and foremost, electrons have charge and photons don't, so it takes a lot of energy to isolate them from ions and send them free streaming through space.

Note that this is why electron microscopes have such good resolution.

Third, electrons are fermions and photons are bosons. This isn't obviously relevant, but when you actually want to detect a macroscopic wave, it helps if you have an Avogadro's number (or more) of particles to give the wave plenty of energy to detect. A low energy, long wavelength electron, because of the Pauli exclusion principle, will always be solo, or require a prohibitively large space to get enough similar wavelength modes near each other, and so it's harder to detect. In comparison, it's actually tricky to get singleton low energy Bosons (correct me if I'm wrong, but I've never heard of people working with centimeter plus wavelength photons that weren't in waves with massive numbers of them).

Long story short, the best you're likely to be able to do with electrons is the sort of charge density waves studied in magnetohydrodynamics, antenna design, wave guides, beam physics (especially in free electron lasers), surface plasmons, etc. In other words, electron waves are usually either microscopic or confined to a region of space by being bound to a conductor or plasma, for practical reasons.

Not the answer you're looking for? Browse other questions tagged quantum-mechanics quantum-field-theory electrons quantum-electrodynamics or ask your own question.

8
Why muonium is unstable?
15
Relation between radio waves and photons generated by a classical current
49
Why don't electron-positron collisions release infinite energy?
11
What makes the electron, as an excitation in a field, discrete?
3
Eletromagnetic waves & photons