Do all voltages sum to zero in a circuit - Kirchoff's laws

I am a science teacher who usually works with match classes or computer courses. Next semester I will be teaching a high school physics course and while I knew how to do this "once upon a time" when I took physics, I no longer remember the details. I remember most of it, but I'm missing some important detail. 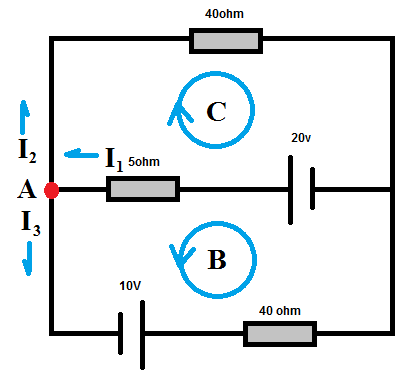 Taking this problem as an example I cretae three equations which are based on the junction rule at A and the loop rule at B and C.

After solving this system of equations I arrive at the solution I1=1A, I2=3/8A, and I3=5/8A. So now I can work out the voltage drop across each element. 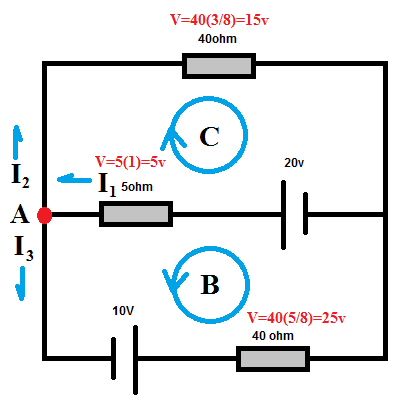 Okay, here is the problem. I expected (perhaps incorrectly) that the total voltage drops across the resistors would equal the sum of the voltage sources. I intened that this be a check on the answers to ensure they were wrong. In this case (an many others) I am getting a mismatch. 5v+15v+25v=45v which is not equal to 20v+10v=30v. Sometimes this works, but most of the time I don't get equal answers.

It has been so long since I did this, I'm hoping someone will know what I have forgotten. Is there a pattern of behavior for the voltages which I should expect to see? Is there some test which the students can do to check their work?

In short: No, not all voltages sum to zero, unless you have a closed path

Take an easy counterexample and put a number $n$ resistors in parallel to a voltage source. The voltage drop over all resistors is just the voltage of the source. If you sum them up, you get something like $(n+1)V_0$. Only voltages in a closed circle sum to 0, which are your equations B and C. As check you might use e.g. $ 40 I_3 - 40 I_2 = 10$, which is just the outer circle.

When thinking about voltages i like to remind myself that theres an electrical potential behind. Every point in the circuit has some potential, like every point on a landscape has a height. Voltages are nothing than differences in potential (or differences in height). If you walk around the circuit you walk sometimes up, sometimes down, but wherever you walk, once you get to the point where you started you are at the same height again. And adding all voltages you passed (watch the sign!) sums to 0. If you end up at a different point however, it can sum to anything.

The second possible test is like your equation A, that on each point the sum of all currents has to be 0 (again, watch the sign). You have a second point at the right side, even though thats the same equation just with opposite signs.

Not the answer you're looking for? Browse other questions tagged electric-circuits electric-current voltage or ask your own question.

9
Pn junction voltage drop?
6
Questions about voltage
0
Voltage Drop and Charge Flow
0
Final charges on Capacitors connected in a curcuit
7
Kirchoff's rules and inductance
0
RC circuits - what can we interpret when the voltage across the capacitor is equal to zero?
1
Understanding Kirchhoff's Loop Law
2
How does a current cause a voltage?