Why centrifugal force (not centripetal force) is considered while deriving the effect of rotation of Earth on "g"?

As I was trying to work out the expression for the apparent "g"-in case of the rotation of Earth-I was considering the centripetal force (m$w^2$r) and the weight (mg) all the time, thinking these were the forces that were acting on the body. 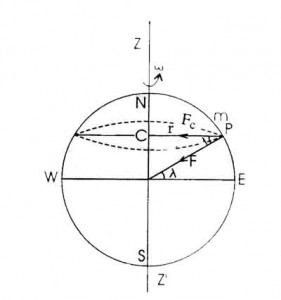 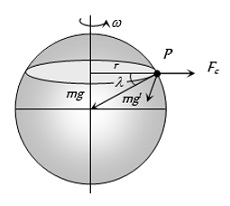 There's a very large conceptual difference between centripetal and centrifugal force. Centripetal force is just a general label for some other physical force keeping an object moving in a circle, as seen from some inertial reference frame. In this case, the gravitational force is the centripetal force. In other cases, it might be the tension in a string or an electrostatic attraction. The point is, it always manifests itself in some other force already present.

In contrast, centrifugal force only appears when you're in some sort of accelerating reference frame. The effect of the acceleration of the reference frame on the objects within it can be represented as a fictitious "force" pulling those objects around. It doesn't come from any real physical force, as it doesn't exist in an inertial reference frame.

In this problem, since you're trying to determine the effect of the Earth's rotation on $g$, you must put yourself in an accelerating frame, namely, one that rotates along with the Earth. In this frame, your object is no longer moving in a circle (it's stationary), so there is no centripetal force. However, since the frame itself is rotating, there is a centrifugal force pointing away from the Earth that lowers the "effective $g$" experienced.

You're right, but you've forgotten one thing: the reference frame. When you are in an inertial frame of reference the only real force in a circular movement is the centripetal force $\vec F_c = - \frac{mv^2}{r} \vec û_r$

Final comment, as you can see in the second image you've put, the centrifugal force causes a little change in the weight direction $mg$ an it does not point exactly to the center of the Earth