Uniform circular motion of a mass on a spring

I'm trying to understand the following problem: A mass is attached to a spring and is set in uniform circular motion. We need to solve for how much the string is stretched, given the frequency of rotation, the unstretched length of the spring, the spring constant, and the mass of the object.

I would set up this problem like so (ignoring the directionality of the spring force):

where k is the spring constant, m is the mass, r is the radius of curvature, f is the frequency, and x is the amount by which the spring is stretched.

As far as I can tell, this is the mathematically correct answer. However, this of course diverges at

which doesn't make physical sense. Furthermore, its answer approaches $r_0$ for values greater than the divergent f. I don't understand this behavior at all.

What would make intuitive sense is for the spring to be stretched more and more as the frequency gets larger. It won't be a linear relationship, but it shouldn't be this mess.

Is this some limitation of the model? Did I make a mistake in the setup? Did I make a math mistake? There's something in here I'm not getting. Any insight would be greatly appreciated.

Edit2: My simplification was wrong. The first equation is correct, and it diverges at the natural frequency.

What this equation is telling you is that the spring is not stiff enough for circular motion to take place above the critical frequency $\omega_0=\sqrt{\frac{k}{m}}$. 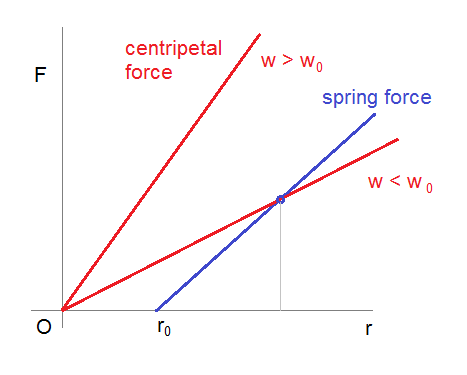 For a fixed angular frequency $\omega$, the required centripetal force $F=m\omega^2 r$ is proportional to the radius $r$ (red lines in diagram). The slope of this line is $m\omega^2$. The spring force $F=kx=k(r-r_0)$ is also linear, with a slope of $k$ (blue line). Where the two lines cross, the spring force is sufficient to provide the required centripetal force at this radius.

As the angular frequency $\omega$ increases the centripetal force (red line) gets steeper and the crossing point moves further to the right. The spring stretches and the radius of the circular orbit increases. As $m\omega^2 \to k$ the red line becomes parallel to the blue line. The crossing point moves out to infinity, and the spring stretches without limit or until it breaks. When $m\omega^2 > k$ the two lines never cross, because the red line is steeper than the blue line. Bound motion (whether circular or elliptical) is no longer possible.

Why not? You're trying to equate two forces. One of them (spring force) is linear with distance. The other (centripetal force) is quadratic with distance and frequency. As the required frequency increases, there is some point past which you cannot make them equal at any $x$. As $x$ increases, the required centripetal force increases faster than linear, so it never catches up. An ideal spring in this situation could not maintain rotation faster than that frequency.

Not the answer you're looking for? Browse other questions tagged kinematics spring or ask your own question.

3
Equal mass on either end of a spring
9
What will be different if the spring is not massless?
0
Very confused about effective spring constant
11
Understanding transverse oscillation in 1 mass, 2 spring systems
2
Conservation of Energy of two charged blocks connected by light spring
1
Hanging mass from spring/ Setting potential to 0
0
Simple Harmonic Motion for Mass Attached to Vertical Spring