How can there be negative energy gaps sandwiching a topological insulator?

At the 37:37 instant of the timeline in this youtube video Stanford University theoretical physicist Shoucheng Zhang presents a graph of "theoretical prediction of the first topological insulator". 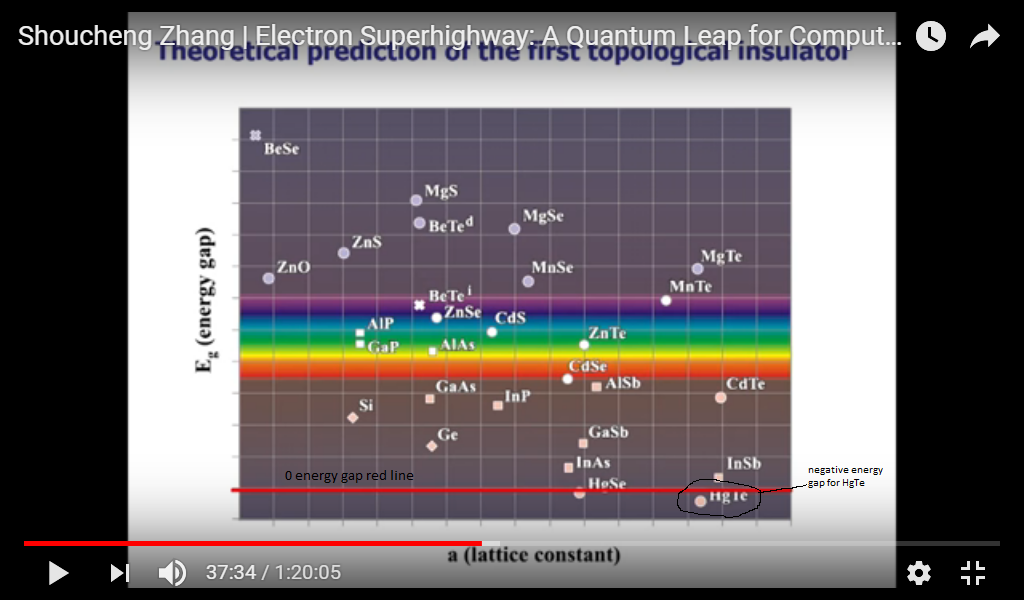 A google search revealed this article as the closest content to anything on this topic but negative energy gap is nowhere mentioned.

Being an electronics engineer, I understand band gaps and energy gaps in semiconductors. I just can't conceptually fathom what a negative energy gap is, and how is it theoretically possible? I can picture a zero energy gap as something we can get close to as with absolute zero. But a negative energy gap seems to imply in my mind some kind of stored energy as in a battery cell but there is no chemical reaction as in oxidation-reduction to cause the electrical potential difference.

Now take this materials, and apply a space-dependent pressure along the materials direction. It may then happen that you put enough pressure to close the gap somewhere, and reopen it later, when pressure is even higher. The physicist picture of this is that the conduction band and valence band crossed each other at the point where the gap closes, and they call the gap at high pressure a negative band gap.

Below the picture from the classical article by Volkov and Pankratov in 1985, where $x$ represents the parameter you vary to put the valence and conduction bands upside down, which I called pressure in my example above, whereas $E$ is the energy of the bands, which you can identify though only their quadratic bottom (for conduction) and upper (for valence) parts appear. The straight lines are guides for the eyes, they represent the displacements of the bottom and top of the bands under the $x$-variation.

The engineer calling is band inversion or band gap inversion. It is usual in semi-conducting systems, especially those with strong spin-orbit interaction, or doping or a change in the chemical composition of the materials, as in the example by Volkov and Pankratov above.

Details is more complicated, as always, but I hope I gave you the main idea. Especially, it is not always clear that you really put the conduction and valence bands upside down. After all, what you've seen is just a closure and a reopening of the gap ; it might well be a band touching before the two bands go far appart as in the initial situation. This subject is quite complicated, and still under debate (to my understanding of the subject). Some people believe they found the correct topological invariant to distinguish between the two situations (band inversion or band touching), but there is absolutely no demonstration of all that, or not a demonstration that I'm aware of.

You may find this other question on the subject quite enlightening as well.

Not the answer you're looking for? Browse other questions tagged topological-insulators or ask your own question.

9
Is band-inversion a 'necessary and sufficient' condition for Topological Insulators?
1
How do spectrum gaps relate to topological protected states?