How do I calculate the low frequency and high frequency gains of an op amp amplifier? 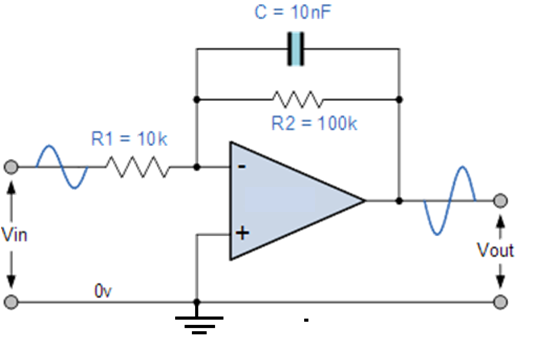 At low frequency, the capacitor acts as an open circuit. This leaves you with an opamp with just two resistors for which you can compute the gain as -10.

At the limit of very high frequency, the capacitor acts a lot like a short circuit. At this point the output of the amplifier is connected to the inverting input; with the inverting input at "virtual ground", there will be no gain.

This shows that the circuit is essentially acting as an integrator with time constant $R_1 C$ - that is, the current that flows through $R_1$ will charge up $C$. The presence of $R_2$ limits the gain at low frequencies (so if there is a small offset in the opamp, it will not result in the output being driven to the rail). An "ideal integrator" (with perfect components) might not even have the resistor $R_2$, but in practice most circuits will put something there for the reason I gave; but the ratio $R_2/R_1$ is often much larger - this extends the range of frequencies over which the circuit acts as a useful integrator.

Not the answer you're looking for? Browse other questions tagged homework-and-exercises frequency electronics or ask your own question.

9
How do you calculate vortex shedding frequency?
2
what could generate a high-pitched whine in electronics where the frequency depends on the current?
1
lock-in amplifier - what's the purpose of the low-pass-filter
0
Can i take a high voltage system and a high amp system and merge them?
2
How does frequency relate to attenuation and why?
0
Spatial frequency and high contrast imaging