I am reading "Optics" by E. Hecht, and I find the explanation of Fermat's Theorem a bit confusing. Specifically:

For me both groups look pretty similar in picture (a). So why do they have different phasors? 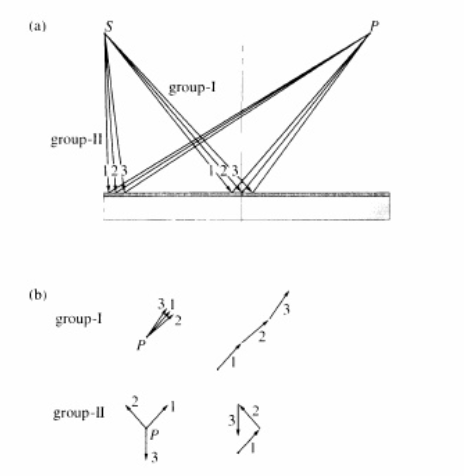 For group I, the total path length from S to P is almost the same: where line 1 is a bit shorter from S to the reflection, it is almost exactly made up for by the fact that the segment mirror-P is longer.

First recall below a beautiful geometric proof of the law of reflection i.e. incoming angle=outgoing angle using Fermat's principle by flipping the outgoing path in the mirror plane: 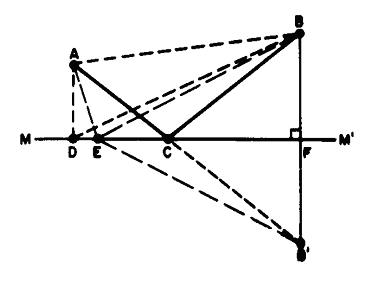 $\uparrow$ Fig. 1 The law of reflection. The shortest path between $A$ and the mirror point $B'$ is a straight line. (Image from the quantapublication.wordpress.com website.)

Obviously, the shortest path is a straight line. Or equivalently, the straight line is a stationary point of path lengths in the set of all paths.

It should be stressed that above observation is at the core of why the path integral is dominated by classical paths, cf. e.g. this Phys.SE post and links therein.

Not the answer you're looking for? Browse other questions tagged optics reflection path-integral geometric-optics variational-principle or ask your own question.

4
Why does the classical path give the dominant contribution in the path integral?