What happens to the energy in an ocean wave after it breaks on a reef or the shore?

I understand that the conservation of energy essentially says that "energy can neither be destroyed or created but that it is transferred from one form to another." Given that, on the ocean, wind energy gets transferred to the sea where it then takes the form of a wave. Ocean waves travel sometimes a thousand kilometers or more. When a wave reaches the shore or a reef it breaks. My question is where does that ocean wave energy go after it breaks, I know it creates sound which is sound energy but that does not seem like enough. Where does the energy go when the sound dies out? Where does the energy go? 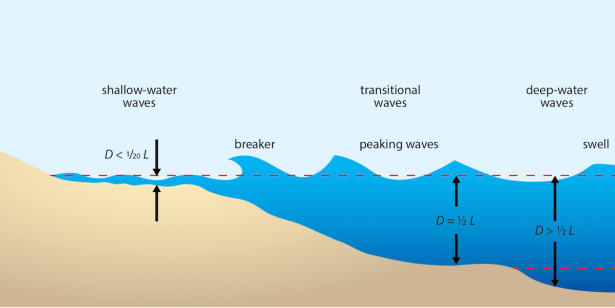 How it will be dissipated will depend on the approach to the coast.

A wave as seen above will start losing energy by transferring it to kinetic and rotational energy at the shallow bottom including sand transfers, which finally will become heat (extra kinetic energy). As there will be conservation of momentum also, part of it will be absorbed by the impact on the earth, as vibrations which will also end up as heat, and also any dissipation in air as you observe. In the picture above sand will be continually deposited on the shore changing the shore line.

A wave hitting a rocky precipice will be transferring vibrations (finally heat) but also will erode part of the rock.

In the end all energy will end up as a higher temperature in the region and ground than if the ocean were calm.

When a wave breaks on the shore, most of the kinetic energy that was propagated in the wave goes into vigorously stirring up the water and mixing it with air as it runs up and then down the beach slope. In so doing it also shoves sand and pebbles around as pointed out by JMLCarter. The stirring action dissipates energy via the viscosity of the water, which warms up by a tiny amount, and that heat is then shared with the sand and air nearby.

Not the answer you're looking for? Browse other questions tagged waves energy-conservation everyday-life dissipation oceanography or ask your own question.

1
Standing wave and energy flux
5
If energy can neither be created nor be destroyed,what is the ultimate source of energy?
2
What ultimately happens to energy?
8
Huygens' Principle and Ocean Waves
3
What was the initial source of energy?
0
Where does kinetic energy go after a car crash?