Currently, the number of physical or logical qubits in different quantum computing prototype devices cannot be meaningfully compared because no one has demonstrated scalable fault tolerance, e.g., [Gottesman]. (All qubits are not created equal.) This is true especially between different computational models (annealing vs. gates) and different substrates, but it also probably applies even for devices built by the same group in the same substrate simply because the marginal computational value of additional qubits in a non-fault-tolerant device is very murky.

With that in mind, we might still consider the following weak evidence: the number of not-fault-tolerant qubits in the best D-wave machine has followed this curve for 6 years:

Likewise, the number of not-fault-tolerant qubits in the Martinis group has followed a roughly similar growth rate for 3 years.

Furthermore, exponential growth in capacity is seen in many areas of classical information processing devices well beyond the number of transistors in an integrated circuit described by Moore's law, e.g., in storage capacity, RAM, power dissipation, and internet traffic. The time constant is very often in the range 1-3 years.

My question: Once scalable fault-tolerance is achieved, how should we expect the number of qubits in a single device to scale in time? Is is reasonable to think qubit capacity will follow a "quantum Moore's law", doubling perhaps every 1-2 years? Conversely, are there reasons to think qubit growth will be much faster or slower, or not exponential at all?

The exponential Moore's law scaling I am asking about here is not the same as the quadratic vs. exponential speedup enjoyed by different quantum algorithms. However, a quantum Moore's law would yield the following interesting argument about computing power for algorithms with a quadratic speedup:

(Obviously this argument does not apply to exponential speed ups.)

I don't know how it will scale in the future, but what you're looking for may be coined Rose's Law (we'll have to see what the lexicon adopts), and the typical plot every one uses is this one: 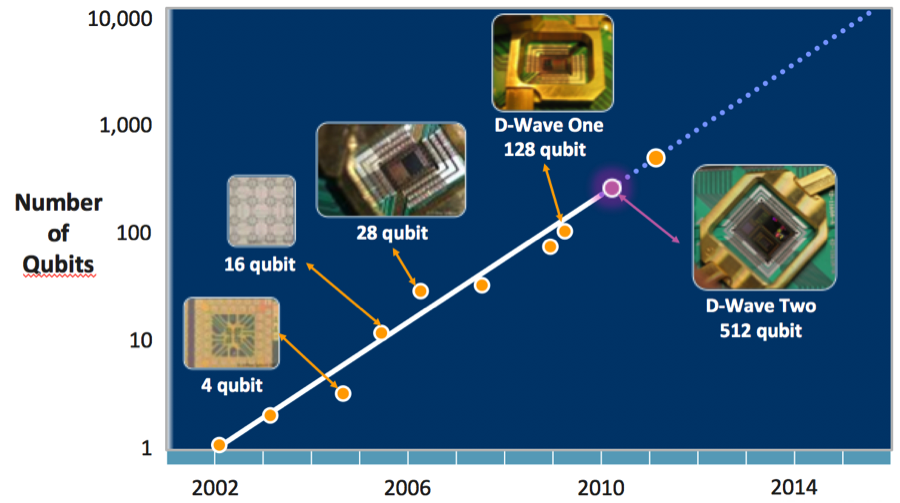 Not the answer you're looking for? Browse other questions tagged quantum-information quantum-computer or ask your own question.

17
Is "analog" quantum-computation not useful?
3
Can we make a Maxwell's Demon using Quantum Computers?
12
How does Landauer's Principle apply in quantum (and generally reversible) computing
3
Are there known fundamental limits of quantum computer scaling?
34
Why not implement quantum circuits on classical computers?
0
Assumptions in the proofs for the optimality of Grover's Search Algorithm
9
Shor's algorithm - why doesn't the final collapse of the auxiliary qubits cripple the computation?
2
quantum superdense coding -How many qubits are needed?
186
Why is Google's quantum supremacy experiment impressive?