What accelerates the solar wind?

The question is in the title.

A bit of background info: the escape velocity at the photosphere of the Sun is ~ 620 km/s, but the mean speed of the solar plasma there (inferred from the temperature) is ~ 150 km/s. Yet not only is the solar wind able to escape the surface, reaching out to ~ 100 a.u., but it's speed there remains relatively high and constant (as Voyager 2 shows, until ~ 85 a.u. the speed is about 400 km/s:

So basically it seems the wind gets almost twice the energy needed to escape (the half of which is spent to actually escape, and the other half remains in the form of kinetic energy) "out of nowhere".

Full understanding for this phenomenon has still not been understood. However, we do have a good idea. It is correct that magnetic field plays a major role in the phenomenon and this part is covered in magneto-hydrodynamics. However, you should start off with a more simple case in which magnetic field in absent and you can consider the whole space to be isothermal. In this case, there are two competing forces The first is the gravitation pulling the gas inwards and the second one is the density gradient which decreases as one goes outwards (mass is constant and volume is increasing). This creates an outwards push, so to say. The thing you are looking for is called the Parker's critical solution for the velocity structure of stellar winds. Note that my assumption for isothermal environment is wrong but could be approximated to a good distance in certain stars because heating takes place due to radiation pressure. However, you can also prove that if there is no energy or momentum deposition in the wind by anything, then the gas will not escape. The final equation for the velocity structure in isothermal case turns out to be (after taking some symmetry approximations) are:- 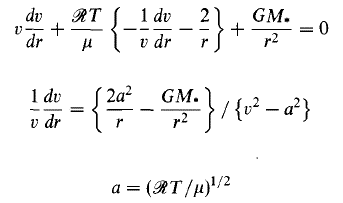 The proof for polytropic winds also goes along the same lines.

Just imagine the sun as continuously emitting this radiation. Thus the previous emitted radiation has more radiation behind it to provide a force.

It doesn't matter that the escape velocity is slower because the radiation force acting on it is greater than the gravitational force. Wether this force come from photons or actual particles it doesn't matter. The point is, the forces don't sum to a negative (relative to particles velocity vector) or even zero, hence 400km/s...

Not the answer you're looking for? Browse other questions tagged electromagnetism sun plasma-physics space solar-wind or ask your own question.