Why isn't gravity included in this calculation for torque?

In this textbook problem which was assigned for homework, I found a flaw in my understanding of torque.

Find the coefficient of friction between the block and slope. 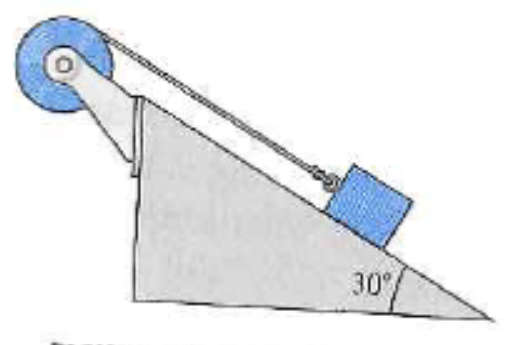 My initial thought process is to consider the torque because one of the forces applied contributes to torque, and that force makes the "drum" rotate.

The applied forces that cause rotation, from my point of view, is the tension force and the force of gravity.

However, upon looking at the solution, I noticed that the force of gravity isn't included in the calculation for torque.

Why is that? I understand that the drum is "attached" to this triangular platform which might be why the force of gravity isn't considered, but when I was trying to answer this question and making my free body diagram, I included the force of gravity.

The single remaining torque is due to the tension of the rope, so that's all you have to consider for the rotation of the drum.

You would have to consider the torque only in the case that the drum were unbalanced: for instance if it were not rotating around the center.

Gravitational Force is acting at the center of the drum which is intersecting the axis of rotation (i.e. $\vec r$ = 0), causing value of torque zero.
Remember, Torque $\vec\tau$ = $\vec r \times \vec F$.

3
Why are some forces not included in the sum of forces?
1
Distinction between torque and force
2
Connection between moment/torque and centre of gravity?
0
Trouble with rotational kinematics
1
Why equating forces give wrong answer?
0
How to understand this torque equation?
1
How can you take torque about an accelerating point that isn't the center of mass?