By combining Bernoulli's Equation and equation of continuity, we can derive efflux velocity as:

But my question is how long does it take to achieve this velocity?

Let's say the hole was initially closed, and suddenly it opened, fluid particles will get pushed and accelerate from initially being at rest till they reach this steady velocity. How long does this take? I don't think it can be assumed to be instantaneous?

MODEL DESCRIPTION In the present development, we assume that the exit hole is situated in the bottom of the tank. This allows us to assume that the flow velocity in the tank is essentially vertical and 1D, rather than having to contend with a complicated 2D fluid flow approaching the exit hole. This substantially simplifies the determination of the kinetic energy of the fluid in the tank, as well as the rate at which gravitational work is being done on the fluid in the tank.

From the continuity equation: $$v(t)=\frac{av_x(t)}{A(z)}\tag{1}$$ From the kinematics, $$\frac{dh}{dt}=-v(t)=-\frac{av_x(t)}{A}\tag{2}$$ We shall next perform a mechanical energy balance on the system, setting the rate at which gravitational work is being done on the tank contents equal to the rate of change of kinetic energy of the fluid in the tank plus the rate at which kinetic energy is leaving the tank in the exit stream.

The time t can be replaced as the independent variable in this equation by the depth h, by combining Eqn. 9 with Eqn. 2 to yield: $$ 2g h=v_x^2\left[1-\left(\frac{a}{A}\right)^2\right]-h\left(\frac{a}{A}\right)^2\frac{dv_x^2}{dh}\tag{10}$$ The key difference between Eqn. 10 and the usual steady state form of the Bernoulli equation is the second term on the right hand side, involving the derivative of $v_x^2$ with respect to h. This term captures the effects of the portion of the fluid acceleration that is omitted from the steady flow version of the Bernoulli equation. 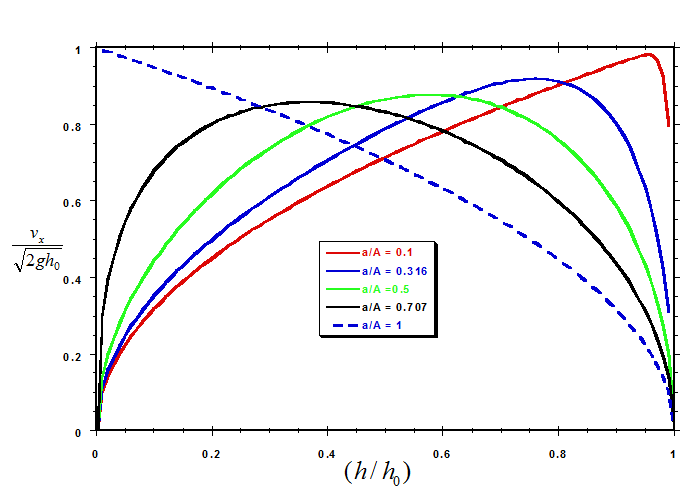 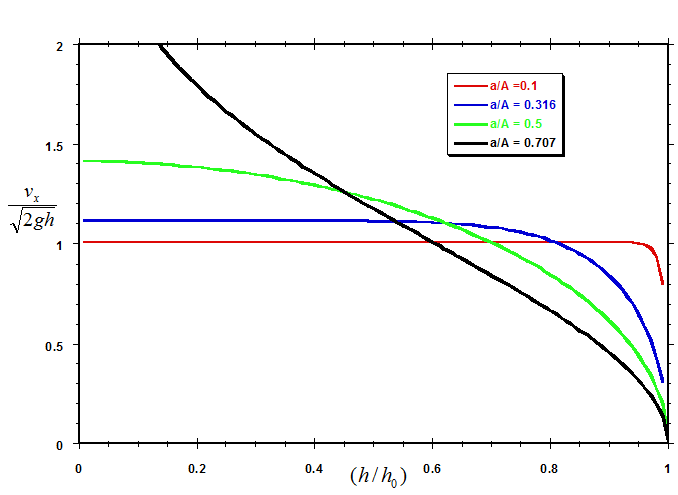 According to the results in the figure, for (small) values of the area ratio a/A less than 0.5, the dimensionless efflux velocity $v_x/\sqrt{2gh(t)}$ levels off to a constant value as the depth of fluid in the tank decreases. The smaller the value of a/A, the more rapidly the dimensionless velocity levels off. From our analytic solution (Eqn. 11), the value to which the dimensionless velocity levels off is given by: $$(v_x)_{level}=\sqrt{\frac{2gh(t)}{[1-2(a/A)^2]}}\tag{12}$$ For the case of a/A = 0.1 in the OP of this thread, we see from the figure that, once the depth h(t) has decreased to about 90% of the initial depth $h_0$, the velocity has already leveled off.

2
Velocity with respect to time in Torricelli's Law
1
Liquid flow in a vertical tube
3
Fluid Mechanics Paradox
2
Bernoulli's equation + Torricelli's law: does the speed of the fluid change if we change the area of the hole but not the height?
0
Torricelli's Law and the Continuity Equation: why is volume flow rate allowed to increase if we change the area of the exit hole?
0
Bernoulli's Principle and Water Hoses
1
Flow in parallel vertical pipes
70
Why does water falling slowly from a tap bend inwards?
0
Flow velocity in parallel pipes confusion