If mass is indeed invariant in Special Relativity, why do we still say things still have a “rest mass”?

My lecturer reaffirmed to us a classical misnomer that mass is relativistic, by pointing out that when considering relativistic momentum the Lorentz Factor is due to time dilation and thus a change in velocity, not mass.

Why then, if mass is indeed invariant, due we say things have rest masses if its rest mass, should, in principle, not change?

Mass is a concept that developed with Newtonian mechanics as an invariant additive quantity. It is correctly called the inertial mass, because it comes from the F=ma identification, the constant response to acceleration.

When special relativity came at first as a proposal and then validated by innumerable data, the E=mc^2 formula gave a handle to understanding the inertial mass , i.e the response to acceleration.

This is the mass that has to be used when trying to accelerate a space ship close to velocity of light, and it was impressive enough, because together with the quantum mechanical description of nuclei ( binding energy curve) it showed a connection of mass and energy.

So in the quantum and special relativity domain, mass is not a conserved quantity, only energy and momentum are conserved.

Clarity of mathematics shows that these are a fourvector, with an invariant to lorenz transformations value when added as four vectors.Rest masses are not additive, four vectors follow vector addition rules, so a system of particles has an invariant mass the length of the added four vectors.

For individual particles it is the "rest mass", at the limit of velocity equal to zero.

The relativistic mass is variable with velocity: 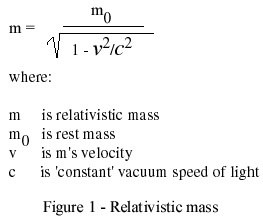 In particle physics the invariant/rest mass identifies one to one the particles in the elementary particles table . All other invariant masses in principle are derivable using the four vector algebra.

So we call relativistic mass the famous mass in the formula E=mc^2 as a respect for the historical development, and invariant/rest mass the four vector "lengths" to stress the special relativity equations.

Because most physicists learned special relativity in books that do use the concept of relativistic mass, in which "rest" mass and mass are different things. It will take some time for these words to vanish from vocabulary.

Not the answer you're looking for? Browse other questions tagged special-relativity mass momentum terminology soft-question or ask your own question.

4
How can one motivate the relativistic momentum?
13
Why is mass an invariant in Special Relativity?
0
Invariant rest mass vs Proper velocity
1
Is the rest mass of a system invariant even if it is a function of time?
1
Is mass still a scalar in special relativity?