Acceleration of masses over a pulley

If two masses are connected by a string that passes over a massless, frictionless pulley as shown in the two examples below, is it necessary that they must have the same velocity and acceleration? If not, wouldn’t the string break since it is inextensible? 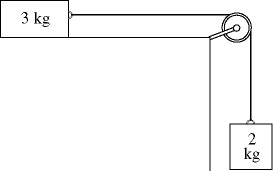 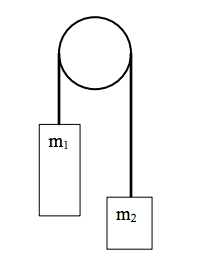 Yes, in these types of problems, you assume that the two masses move with the same velocity and acceleration since the string is considered inextensible.

There is an assumption here : that the string moves along a fixed path on each side of the pulley. Every point on it follows the same path as the string moves. Even if the string twists in different directions between several pulleys, its path is effectively one-dimensional (1D). If we unwound the string and laid it in a straight line this would not change the speed which each point on it has in 3D space. 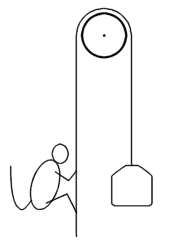 In another example you give (monkey on a rope) the monkey can climb up or down along the rope. It is not attached at a fixed point. So the distance measured along the rope between the monkey and the hanging weight can change. It follows that in this situation their speeds and accelerations can be different.

Not the answer you're looking for? Browse other questions tagged homework-and-exercises newtonian-mechanics string or ask your own question.

2
Relative acceleration of bodies on opposite sides of a pulley

6
Pulley and Two Masses: Why is the acceleration the same?
2
Understanding tension based on assumptions of pulley system
9
Newton's second law: system with three blocks and a pulley
1
Dealing with pulleys and strings with mass
3
Why can’t we consider these two masses as a system in case of a pulley?
0
Pulley and two masses - Conditions for acceleration to be different