Paradoxic cylinder rolling in opposite direction

I just solved the following exercise from my textbook and I don't really see the intuition behind the result:

In which direction will the cylinder roll (without slipping) if a constant force is applied on the rope? Inner radius, lower 'r'; outter radius, upper 'R'; moment of inertia, 'I'; and mass, 'm'.

The force is applied below the rotation axis and thus, if there weren't any friction one would expect it to rotate counter-clockwise. It turns out that with friction it does not. 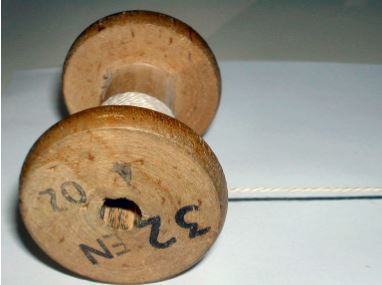 I tried to solve it using Newton's Laws and Momentum:

However I would expect it not to roll at all, but to stay still. This is what you get if $r = R$ but just in that case. (Or maybe rotate to the left because of the torque generated by the rope?) Is it there any intuitive way of understanting what is going on here? It seems that the friction force is taking over control and rotating the cylinder the way it wants.

We can show this without resorting to numbers at all!

First off, you have been told that the coefficient of friction is large enough that the wheel does not slip.

Now assume it rolls to the left, and you can show by contradiction that it does not. Think about what would have to happen for it to move to the left. Since $F=ma$, the net force would have to be to the left, which means the frictional force must be larger than $F_{\rm rope}$. But then the torque due to friction is clearly larger than torque due to the rope, since it has both a greater force and a greater lever arm, and so it rolls clockwise. If it is rolling clockwise but moving left, it must be slipping, so we have broken our assumptions.

We can show the same way that it can't remain still. If the two forces are equal, the torques are not equal (since they have a different lever arm), and so it will begin to roll.

Thus, the only way it can roll without slipping is to the right.

0
Rolling ball which slips
2
Cylinder rolling down an inclined plane
7
Is work done in rolling friction?
1
Rolling dynamics of round objects down an incline
0
Pure rolling of cylinder with arbitrary inertia
0
Is the non-rotational form of Newton's second law still valid for rolling objects?
0
The role of friction in rolling without slipping
1
How do objects begin to roll if static friction equally opposes the applied force?