While trying to understand the second law of Newton from "An Introduction to Mechanics" by Kleppner and Kolenkow, I came across the following lines that I don't understand:

"It is natural to assume that for three-dimensional motion, force, like acceleration, behaves like a vector. Although this turns out to be the case, it is not obviously true. For instance, if mass were different in different directions, acceleration would not be parallel to force and force and acceleration could not be related by a simple vector equation. Although the concept of mass having different values in different directions might sound absurd, it is not impossible. In fact, physicists have carried out very sensitive tests on this hypothesis, without finding any variation. So, we can treat mass as a scalar, i.e. a simple number, and write $\vec{F} = m\vec{a}$."

The lines above lead me to question:

I think that an example will clear out your doubts.

Consider a 3D system in which you have three axis $xyz$. Consider a force that can be written as: $$ \mathbf{F} = F\hat{x} + F\hat{y} +F\hat{z} $$ Therefore, this force is identical in each direction. If we have three different masses depending on the direction we are considering: $$ m_x, m_y, m_z$$ Then we will have different accelerations depending on the direction in which we are studying the motion: $$ a_x = F/m_x, a_y = F/m_y, a_z = F/m_z$$ And therefore, the vector acceleration $\mathbf{a} $ will not be parallel to the vector force $\mathbf{F} $, since in each direction the masses (and therefore, the components of the acceleration) are different.

However, this has shown up to be wrong, according to some experiment. Therefore, the book is saying you that there is an evidence that the mass is identical regardless of the spatial direction you are considering.

Force could be treated as a vector even if mass behaved different in different directions. In this case, mass would not be a simple scalar, but it would be what is called a second rank tensor. Treating vectors as column $3 \times 1$ matrices, force and acceleration would be

the second rank tensor representing mass would be simply a $3 \times 3$ matrix:

and Newton's second law would read deceptively like its well known form, $\mathcal{F}=\mathcal{M}\mathcal{A}$, but definitely not with the same content:

According to this general formulation, the resistance a body has against a change on its state of motion is direction-dependent. In particular, if a force acts in one direction only, the body may accelerate in different directions as well depending on which elements of the mass matrix are nonvanishing.

In some sense, the above relations are similar to the rotational dynamics of a rigid body, where torque relates to angular acceleration by means of a "rotational inertia" matrix. The consequences in such case are less abstract. If a body is set to spin along some direction, its spinning direction usually deviates from the original direction in "unexpected" ways depending on the rotational inertia matrix of the body, initial conditions and applied torque. For instance, a spinning top will precess due to the action of gravity, but this effect is much more impressive as seen here at 35:20; it will precess even if gravitational torque is absent if it is set to spin along a direction other than its symmetry axis, like here at 0:54; for a very dramatic situation of instabilities on the free rotation, see here (starting at 0:28).

Nevertheless, the two cases may be very different in general. The most general rotational inertia matrix has the very important feature of being symmetric (it is the same as its transpose) what guarantees it can be diagonalized so that torque and angular acceleration can be made parallel in some well chosen coordinate system. On the other hand, the most general mass matrix may not have such property (not that I can tell at least). Because of that, it is possible, for some values of the elements of the mass matrix, that a force along a single direction acting on a body's center of mass produces an acceleration in some perpendicular direction only.

In the context of quantum mechanics, as far as now (see this Wikipedia page), experiments indicate the mass matrix for a single body is diagonal with all mass elements equal, so mass can be taken as a scalar quantity.

Consider the motion of rigid body and the role of mass in it:

Observing the second case, you should be able to understand what the authors were probably referring to when they say: "...Although this turns out to be the case, it is not obviously true...".The authors probably try to present a more general perspective by noting that the fact that the amount of substance containing in an object, which is known as mass of that object is scalar, because it has been observed/measured that everywhere the mass of the object is constant, which is not implied by anything. For further reading, check the notion of isotropy.

There could be an additional nuance to this question related to the definition of mass in special and general relativity.

There's a different perspective which starts from conservation of momentum: It is experimentally observed that, in a collision of involving particles 1 and 2, one can always find two scalars $m_1$ and $m_2$ so that $$ m_1\vec v_{1b}+m_2\vec v_{2b}=m_1\vec v_{1a}+m_2\vec v_{2a} \tag{1} $$ where $\vec v_{ib}$ are the velocities before collisions, and $\vec v_{ia}$ the velocities after collisions. In fact, this type of experiment only allows the deduction of the ratio $m_1/m_2$. (This is a Newtonian definition with idealized particles from which pieces cannot be chipped off.)

Having established that $m_i$ is a scalar through conservation of momentum, a force $\vec F$ is what is responsible for a change in momentum. Since $m\vec v$ is clearly a vector because $\vec v$ is a vector, the force is related to a change in $\vec v$, i.e. a difference between two vectors, and must therefore be a vector itself.

The absolute values of $m_1$ and $m_2$ (rather than their ratios) can be obtained by taking the ratio of $m_i$ against some standard reference mass (which is what is done in practice since we have a reference kilogram).

In Newton physics, mass is the resistance of an object to linear acceleration. In other words, you define mass by applying a force to a system and by analyzing its liner acceleration.

In this sense, it is not necessary that the linear acceleration be parallel to the applied force. The analog of this is inertia, which is the resistance of an object to angular acceleration. In the case of inertia for example, you may apply a torque only about $x$ axis and find out that the body gets an angular acceleration about $y$ axis as well. This is why inertia is a second rank tensor, not a scalar.

If mass was like inertia (if we ever found out that applying a force in $x$ direction can cause a linear acceleration in $y$ direction), we wound need mass not as a scalar but as a second rank tensor (or a matrix in the more common language). Then, we would have: $$f_x=\vec{m_x}\cdot \vec{a}\\f_y=\vec{m_y}\cdot \vec{a}\\f_z=\vec{m_z}\cdot \vec{a}$$

If mass is a vector quantity then how does one find the total mass of two vector masses after they are combined?
Is there really any evidence that two objects of equal magnitude mass $m$ when joined together exhibit variations in the magnitude of their combined mass varying from $0$ to $2m$?

Consider a solid sphere with mass $m_1$. Now lets say there is a hole through the center that runs horizontally from end to end. Inside this hole is another mass $m_2$ that slides without friction.

So the relationship between forces and accelerations is not always a simple vector scaling operation, but more complex. 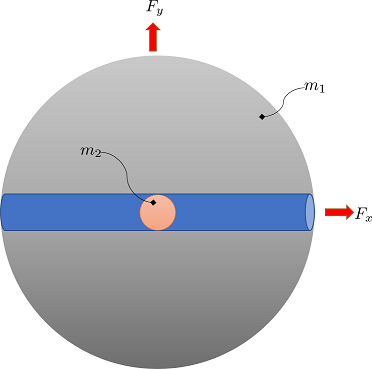 The only physical stipulation for $\mathcal{M}$ is that it is symmetric matrix.

In robotics, whenever you have multiple connected rigid bodies you have the concept of Articulated Inertia which is exactly as shown above. This matrix in general is not a scalar multiple of the identity matrix, but has varying diagonal elements and cross terms in the off-diagonal.

0
Force as a vector
1
Does mass depend on the dimensions in space? Isn't mass the same in which dimension you look?

11
Logical connection of Newton's Third Law to the first two
4
How Did Newton's Second Law Get Its Definition?
0
Why every force on negligible mass is negligible?
20
Why is force a vector?
0
Linear momentum being independent of the coordinate system
3
Operational definition of mass
2
Force, Newtons second law