What lands first a bullet shot or dropped

I think that when you shoot it, it will land later because since the earth is round wherever it land will be slightly lower than were the dropped one landed. So why do they say they will land at the same time?

Edited to fix a mistake.

You raise a very good point. As everyone has said, it is a very small effect for bullets. But if you go faster than a bullet, it becomes important. And if air resistance is a problem, you can go above the atmosphere to try it.

Without air resistance, the bullet follows a parabolic path in a uniform gravitational field.

But if we are considering a region large enough that the curvature of the earth matters, the field is not uniform. The force is toward the center of the earth. The trajectory is an ellipse.

If you drop the bullet, the "ellipse" is very skinny - a line. You only get part way through the ellipse before you hit the earth.

If you shoot sideways with a low velocity, you go part way around the earth before the ellipse hits the earth. It is a little like shooting from the top of a hill. The bullet fall farther before hitting, and takes longer than on level ground.

If you shoot fast enough, it would go halfway around the world before it landed. At this point, it would be half way through the ellipse. It would be traveling horizontally, and just graze the earth.

If you shoot faster still, it would not hit the earth. It would follow an elliptical orbit all the way around and come back at the same altitude as it started.

Faster still, and the orbit would become circular.

Faster still, and the orbit would be elliptical, but the point where you shoot would be the lowest point of the orbit.

If you shot extremely fast, faster than the escape velocity of the earth, it would fly away into space and never return.

You are technically correct: due to the curvature of the earth the bullet has further to fall and hence will take longer to land. In practice it will be very hard to tell, though.

If the bullet travels 1 km, the earth's curvature adds 8 cm to the height. If the range is 5 km, then the earth drops 196 m over that range. See this page for calculations. Those extra heights may seem significant.

However, in most cases the bullet cannot travel that far as it will be falling. If we fire from a 1 m height, then the bullet will drop all of that 1 m in only .44 s. Assuming a typical bullet speed of 500 m/s, in 0.44 s it has travelled only 220 m. The earth's curvature over that distance adds only 3.8 mm to the drop height.

In other words @Chris's comment is correct: you'd be hard pressed to measure the difference.

The measurement is also affected by various possible errors, including the following:

All of these can have effects that are greater than the difference caused by the curvature.

This is a typical question of the style illustrated in the image. 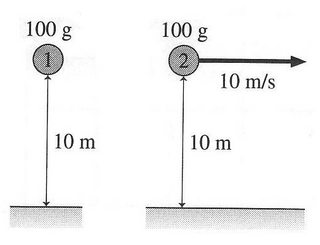 Assuming air resistance is neglected, the key point is that there is only the force of gravity acting vertically in both situations. As a result of $\vec F=m\vec a$, there is no acceleration horizontally in either situations, so that ball 2 with merrily continue its horizontal motion, unaffected by the vertical motion, and the vertical motion will be unaffected by the horizontal motion.

Since the vertical force is the same in both situation, both balls will hit the ground at the same time if they start with $0$ velocity from the same height. The curvature of the Earth is unlikely to be a factor unless your bullet travels significant distances.

Not the answer you're looking for? Browse other questions tagged newtonian-mechanics newtonian-gravity projectile drag or ask your own question.

11
Will a bullet dropped and a bullet fired from a gun horizontally REALLY hit the ground at the same time when air drag is taken into account?
2
Projectile Path Farther Away From Earth
2
Determine initial velocity of an object which was thrown (WITH air resistance)
0
How can a horizontally fired bullet reach the ground the same time a dropped bullet does?
0
Resistance in fluids
0
Flight time of spherical bullet fired horizontally versus dropped vertically / effect of crosswind on spherical car