Tension in the same string between different masses

In the given diagram: 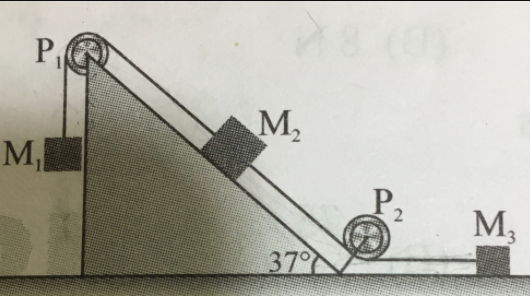 To explain why, first consider why IS the tension same throughout the same string. (Also the string is considered massless, the assumption is trivial unless mentioned otherwise)

Now, let's consider an element in the string and let's say that the tension on either side of it is $T_1$ and $T_2$. Now recall Newton's second law which states that summation of all external forces on the body is equal to its mass times its acceleration. Hence we write that $T_2 - T_1 = mâ€˘a$. As mass of string is zero the mass of each element is also zero. Hence,we get $T_2-T_1 =0$ or $T_1 = T_2$ proving that the tensions are equal in a massless string. This equality of tensions can only happen if the mass of the body (under analysis) is zero. Hence, as the block has mass the tensions will be different. Also, question specific: the block is under influence of gravity also which must be taken account.(Although the acceleration is zero it's mass isn't).

0
Tension in a string attached to different masses

2
Why do the masses in an Atwood's machine move?
0
Why is the tension in Atwood machine maximized when $m_1=m_2$?
0
How do I solve this block-string system problem?
0
Tension in strings which accelerate 3 masses
2
Tension in massless rope