Tree vs lightning rod: why does one burn and the other not?

I have this simple question, but I cannot find the answer.

I saw this video about a plane getting hit by lightning. In it, Captain Joe explains why people do not get electrocuted. This has a simple explanation, due to the Faraday cage effect produced by the fuselage. But another question come to my mind in that moment: why does the aluminum from the fuselage, that acts as a Faraday cage, not melt because of the extreme currents carried by the lightning?

After this, I thought about the following example: A thin metal (correctly grounded) lightning rod is almost intact after a strike, while a tree breaks in the middle and sometimes it even burns: 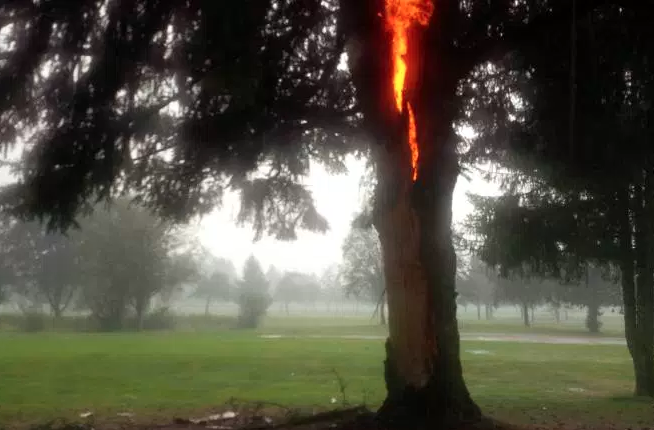 Clearly it has something to do with the resistivity of each material, much higher in the tree's wood.

It is also said in this article that the only dangerous zone a plane can get hit "is the radome (the nose cone), as it's the only part of a plane's shell that's not made of metal". So it clearly has something to do with the conductive properties of the fuselage.

So my question is basically this: why does a tree break and burn when struck by lightning but a lightning rod does not?

And, ultimately: why does a plane hit by lightning not melt with the hundreds of thousands Amperes going through the fuselage?

The amount of heat generated by current flowing through a resistor (whether from lightning or more ordinary sources) is directly related to the power dissipated by the resistor, which is $$ P = I^2 R.$$ $R$ is small for objects made from good conductors, which many metals are, and large for objects that are made from bad conductors like plastic or wood. Since a lightning strike has a very short duration, the total heat generated during such a strike is not enough to melt metal, but enough to set wood aflame or melt plastic.

If you let the large currents from the lightning strike run through the metal for longer, it probably would also heat up gradually and eventually melt, but this would take longer than the time scale on which lightning occurs.

The high electrical current in a lightning strike delivers heat energy along the full length of the lightning bolt. Part of that length is in the ionized air over the plane, part is the plane's fuselage, and part is the ionized air from the plane down to ground. The current is the same, but the heat generated is proportional to the electrical resistance of the path, and the aluminum of the plane (as well as the joints that hold the aluminum parts together) has very low electrical resistance. So, the air path gets very hot, while the aluminum path does not.

Trees and air have high electrical resistance, but (at breakdown) have a narrow conducting channel (ionized gas is 'Z-pinched' into a narrow channel, and the first woody parts that carbonize will hog all the current). So,

Heating per unit length of air is more than the aluminum plane because air has higher resistivity, even with comparable conduction cross-sectional area.

A tree contains a lot of water which converts explosively into gas when the electrical current flows throughout the tree. Wood is also more combustible than metal, so it catches fire due to the extreme heat.

In an plane fuselage, the current flows harmlessly along the outside of the plane and back out. The plane is not grounded. The same way a car is isolated by having rubber tyres.

Not the answer you're looking for? Browse other questions tagged electricity electric-current everyday-life conductors lightning or ask your own question.