Why we see things on distances we shouldn't see?

One person took experiment from Montenegro and with distance 201 km he saw clearly montains that are 1521 meters high. He was on 189 meters above the sea level. Official calculator says you cannot see less than 1811 meters from that distance. My question is: Why he saw the mountain? Is there any reference that can help me understand that. I'm a mathematician and I calculated that the radius of the Earth should be 7260 km for that to be possible. I need to understand which physical laws are related to this problem and please give me a reference.

These are selective quotes from the link:

Looming is also an optical illusion which occurs usually in very cold regions. In looming, a distant object such as a ship moving in polar areas appears to be hanging in midair due to atmospheric refraction and the total internal reflection of light rays. 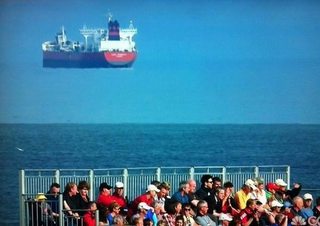 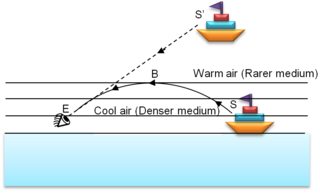 In Polar Regions the layers of air near the surface of earth are very cold and hence behave as optically denser medium. Whereas, the upper layers of air are comparatively warm and hence behave as optically rarer medium. Now, a ray of light coming from point S of ship goes from denser to rarer medium along the path SB and bends away from the normal, at every layer due to atmospheric refraction. But, at a particular layer, when the angle of incidence becomes greater than the critical angle, the total internal reflection occurs, and the totally reflected ray travels along the path BE and reaches the observer. As we have already discussed that we can see the light only in straight line path, so the reflected ray BE appears to be coming from the point S’ to the observer. Due to this, the observer sees a virtual and erect image of the ship at position S’, which is much above the actual position of the ship in the sea.

Per @John Forkosh, the refraction phenomena is called "looming":

Not the answer you're looking for? Browse other questions tagged optics atmospheric-science or ask your own question.

42
Why can't we see gases?
2
Transfer matrices - drift distances
1
Why shouldn't we shine laser light back into the laser?
0
Why does looking through an LCD panel make things blurry?
5
Can we see/detect things which don't have electrons
3
How to see wind?
22
What is the scientific explanation for radio waves bending around the Earth?
0
Why do we see things upside-down when we’re upside-down but not a camera?