In his introductory book on quantum mechanics, Griffiths solves the time-independent Schrödinger equation for a delta potential of the form $$V(x) = -V_0\delta(x).$$

Now, while analyzing scattering states he derives the following equations in the various regions, 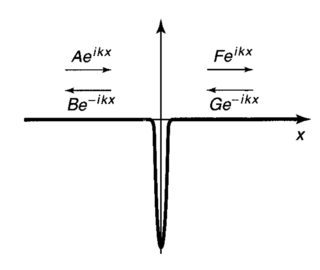 Similarly, saying "$\psi$ is physically meaningless" is not particularly correct, either - it is a tricky object to interpret, but its physical content goes well beyond just the position-space probability density $\rho_X(x) = |\psi(x)|^2.$ As an example, the phase is crucial in determining the momentum-space density $\rho_P(p) = \left|\tilde \psi(p)\right|^2$, but even that is not enough - even full knowledge of $\rho_X(x)$ and $\rho_P(p)$ is insufficient to completely determine either $\psi$ or the experimental observables that can be obtained from it.

1
Going left or going right of the free particle wave function?
2
Why is the reflection coefficient in quantum mechanical scattering defined this way?
3
1D Scattering Phase Shift (Finite Well) - Unphysical?
1
Quantum Tunnelling with Delta Potential
10
Why is the momentum-space wavefunction for a free particle not a function of time?
0
Time evolution of momentum wave function when initial position wave function is in an eigenstate (i.e., a delta function of position)
0
Probability current calculations