This question is specific to the Copenhagen interpretation, which states that the wave function collapses on interaction. If we have a beam of light reflected off a mirror, whether you see this light as a quantum field or a stream of photons, either way the reflected light is not the same as the original light. The original photons have been absorbed in the mirror and new photons reemitted in a different direction. The wave function also is different accordingly. So on one hand, it would seem that the original wave function collapses at the mirror.

However, a mirror reflection does not affect the results of interference experiments, such as the double slit experiment. Mirrors are used in lasers producing highly coherent light. And finally, mirrors are used in various quantum entanglement setups without affecting the state of entanglement. If this understanding is correct, then it would seem that a mirror does not collapse the wavefunction.

As I understand it, the question boils down to, "Why doesn't a mirror collapse the wavefunction of a photon that reflects off the mirror?". The answer is that the photon does not change the state of the mirror. After the photon has been reflected, the mirror is unchanged. There is no way to prove that the photon struck the mirror without also detecting the photon's path downstream. The only state-changing event that occurs to the photon is its detection where it strikes a screen (or camera sensor, or an observer's eye, etc.).

Detection is an interaction that results in an observer "knowing" that the wavefunction has collapsed. Yes, it's a vaguely circular definition. In the many worlds view of quantum mechanics, an observer "detects" the state of a particle and in doing so splits his world into as many different independent alternative worlds as there are possible values for the state of the particle.

All that is background for saying that as long as there is no possible way to know that the photon reflected off a given mirror in an interferometer, the photon wavefunction takes all available paths including those in which it does not reflect of the mirror -- and it will thus form the interference pattern we observe.

If we were to make the mirror so tiny and thin that its recoil could in principle be detected , there would be no interference pattern. I know some folks will ponder what might happen in the gray area between using an extremely tiny & thin mirror and using a normal several-to-many grams mirror. I don't know if anyone has done the experiment, but I'll bet what happens is that the interference pattern's contrast is reduced as the mirror's recoil approaches detectability. It would be an experiment worth doing.

I’ll follow your argumentation step by step. So some passages of mine are more comments or affirmations of your thoughts.

This question is specific to the Copenhagen interpretation, which states that the wave function collapses on interaction.

No more photon after absorption, no more wave function. Obvious, even without Copenhagen interpretation.

Right, the new wave function is different with the frequency of the photon (slightly red shifted) and with the direction of propagation.

However, a mirror reflection does not affect the results of interference experiments, such as the double slit experiment.

Could not agree. Shifting one of the mirrors the intensity distribution on the observers screen changes. And for a Gaussian beam and well adjusted mirrors the spot of the beam could be dislocated to the reflecting part of the half transparent mirror (marked in the image below with a double arrow) or to the transparent part of the mirror. The intensity distribution from the incoming beam stays unchanged in this case. 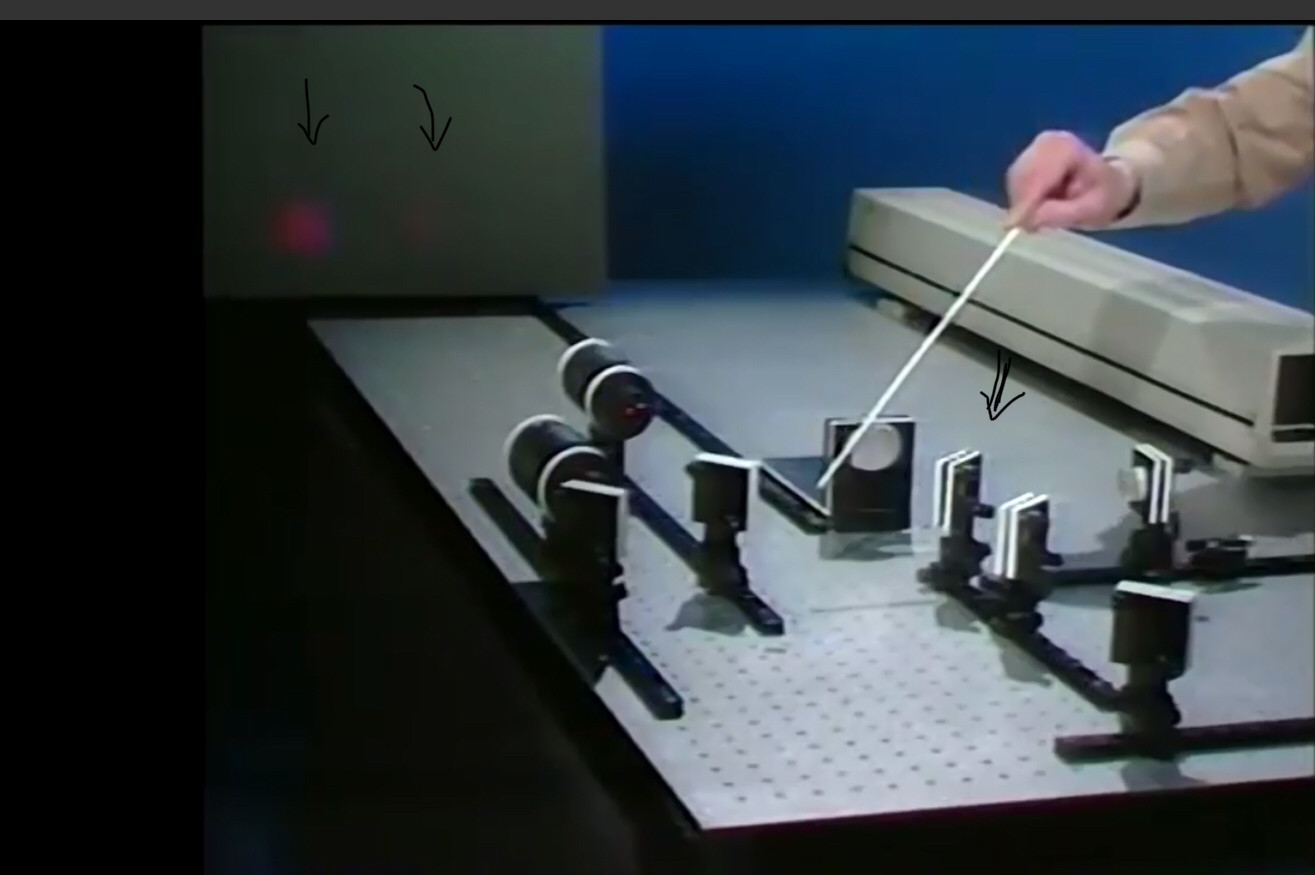 See this video, the important point starts at 5:00).

The counterargument could be that the mirrors rearrange the photons state all in the same manner.

After realizing that the wave function of the photons of an interferometer setup are not additive but only re-distributed in different ways dependent from the mirror positions there should be another interpretation. For example it has to be investigated how the photons produce phonons in the mirrors and how this retarded the transmissive and reflective part of the mirrors.

Reflection doesn't collapse the wave function because it occurs as a logical consequence of the photon waveform undergoing refraction at a boundary under the Fresnel equations (which determine the proportion of the wave refracted and reflected at any given angle). It is therefore a property of the photon waveform and has nothing to do with wave function collapse. In other words, reflection does not involve photons being absorbed and emitted but each photon as a waveform being subject to refraction and reflection under constraints internal to its nature as a waveform as expressed in the Fresnel equations.

Not the answer you're looking for? Browse other questions tagged quantum-mechanics quantum-entanglement reflection quantum-interpretations wavefunction-collapse or ask your own question.

2
Young slits, mirrors and interference patterns
18
Can light continue without a light source?
33
Why can interaction with a macroscopic apparatus, such as a Stern-Gerlach machine, sometimes not cause a measurement?
28
Would every particle in the universe not have some form of measurement occurring at any given time?
6
How is the classical EM field modeled in quantum mechanics?
5
What makes the pre-slit photon detector act differently than air in a which way double slit experiment?
2
Why does a laser beam stay coherent when it passes through glass?
0
Is an atom's photon recoil on absorption affected by a beam splitter?
0
How does mirror reflect light (according to quantum mechanics)?
1
Will the mirror reflection make the interference pattern disappear?
See more linked questions

3
Entanglement and the double slit experiment
0
Does a Polarizing Beam Splitter Cause Wave Function Collapse?
0
Wave function collapse of entangled photons?
5
If two particles are entangled and you collapse the wave function of one of the particles. Does the other particle collapse as well?
7
What happens at the QM level with a photon hitting a mirror?