Why does the LED turn off if the high current is going through the short?

None of the other questions related to short circuits seems to answer my question.

I understand how short circuits work theoretically, that if there is a path with no resistance in a circuit then all of the current would flow through the short, and not the rest of the circuit.

I understand that this makes sense in a theoretical sense, but in the real world, even if you have a power source with no internal resistance (which, as I understand, none do) there's still a very small amount of resistance in the copper wire within the circuit itself. Therefore, a short circuit seems theoretically impossible in real life, yet I've replicated it when building simple circuits myself.

In one electronics experiment I did that demonstrated a short circuit, I connected a 1.5V AA battery to a resister and LED in series. The LED lit up. The instructions for the experiment instructed me to take another wire and connect it to the circuit over the resistor and the LED, one end on each side. This shorted the circuit and the LED turned off. I removed the extra wire after a few seconds and the LED came back on.

This is what I don't understand. I understand the wire I connected across the resister and LED should have a very high amount of current.

Given a foot long 20 guage copper wire has 0.01 Ohms of resistance and 2 AA batteries have 3 Volts together, the wire used to create the short should have had 300 Amps of electricity going through it. Still a lot but not infinite. Shouldn't the path with the LED still have the same amount of current, based on it's resistance, whether the extra wire is there or not?

This seems to checkout in a simulation I've run as well using this tool: http://www.falstad.com/circuit/circuitjs.html

This first image represents a simple circuit where current flows against a normal amount of resistance. 5 volts and 100 Ohms of resistants yields 50mA as you'd expect 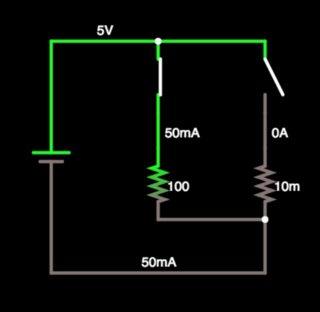 In this example, I've shorted the circuit with a copper wire with 0.01 Ohms of resistance. Now we have 500 Amps of current across the short, but we STILL have 50mA across the original circuit. Thus the effect I saw in my electronics experiment didn't carry out in the simulation. 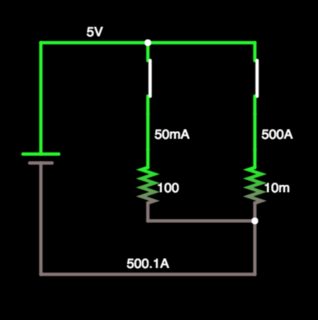 TL;DR: Why does the LED turn off if the high current is going through the short?

Your actual question seems to be "Why does the LED turn off if the high current is going through the short?". And the answer is that a voltage source (like a battery) can only supply so much current. Some Googling seems to suggest that a typical battery can only deliver around $1\, \mathrm{A}$ of current or thereabouts; I don't know if this is exactly right, but it certainly is much less that $300\, \mathrm{A}$.

Applying this to your simulation, let's say the short has 1 amp going through it. This implies a voltage drop of $0.01\, \mathrm{V}$, so the other resistance has $0.01\, \mathrm{mA}$ of current, probably not enough to power an LED.

Infinity and 0 are often a good approximation for "very big" and "negligible" in physics.

Zero resistance can be obtained with superconductors, but it usually isn't easy. That said, even a very low resistance is sufficient to short a circuit. And there is another interesting effect: while Ohm's law says that the current can grow indefinitely by lowering the resistance, in reality the number of electrons a battery or any other source can supply is limited, and thus the current can never grow over a certain value.

Of course they don't exist, because you can never reach infinite current.

The thing is that you don't need it to be infinite, just "too high". If resistance is "too low", then the current can be higher than the one allowed by materials. That can make things to break, or especially to blow/burn the device.

A resistance might just get enough temperature to melt down, but other fragile objects can have worse consequences.

You are making the assumption that the battery is perfect- that it can source 300 amps and still supply the same voltage. In reality, the internal resistance of the battery is much larger than $.01~\rm\Omega$. The result is that the output voltage drops when you load it with such a small resistance.

You can assume the resitance in the wire is much much smaller then the LED+Resistor. So assume the total resistance seen by the battery is the short. Next look into the ratio between current flow for the parallel circuit. Then check into the LEDs characteristics. If the LED lit up again after the short was removed the battery didn't burn out and there had to be something going through or not going through the LED but all that is up to you to dig into. All semi-conductors are a bit different and the LED might have current flowing through it but because of probabilistic reasons the amount of light emitted can be close to zero with an increase of energy. The photons will have more energy but the intensity will decrease. You can check into fermi probability and something called the density of states inside the materials if you want. Or you can download the LED characteristics online and try digging around this data sheet to figure out what you can do to figure out how diodes work. Good Luck!

A short circuit is really just a parallel circuit added where it shouldn't be. If the parallel circuit is low resistance then it takes most of the current. You only need to know the calculations for resistance in parallel to workout whats going to happen when your circuit is shorted, unless you've added more complex components to parts of the circuit.

(I'm not very experienced, if this is wrong please comment)

Not the answer you're looking for? Browse other questions tagged electric-circuits electrical-resistance batteries light-emitting-diodes short-circuits or ask your own question.

0
If connecting an ammeter in parallel will cause short circuit, why won't connecting it in series does?
77
Why doesn't current pass through a resistance if there is another path without resistance?
0
I am trying to understand wire gauge size vs current flow?
0
Breadboard LED circuit
1
Voltage Change Across a Resistor/Circuit
0
Is there any way to get a different current (apart from $\frac{V}{R}$) across a resistor with a specified potential difference between it?
0
Voltage over current source and its short circuit wire
0
Graph profile of the voltage drop vs resistance across a resistor, and the physics behind electric potential difference