How is the mass of an electron determined? [duplicate]

The question itself is pretty self explaining. I found some answers on the internet but all of them refer to the experience where an electrons mass was measured by observing its curvature in a known magnetic field. I always heard that an electron and other fermions behave like light and is neither a wave, neither a particle but still can behave like one of the two states. So how did they measure its mass?

I always heard that an electron and other fermions behave like light and is neither a wave, neither a particle but still can behave like one of the two states. So how did they measure its mass?

You have forgotten or never noticed that the particle and wave duality depends on the boundary conditions of the experiment and the very small number h_bar, the Heisenberg uncertainty principle.

The track of an electron in the bubble chamber is a particle because its dp.dx uncertainty is well over the bounds of h_bar 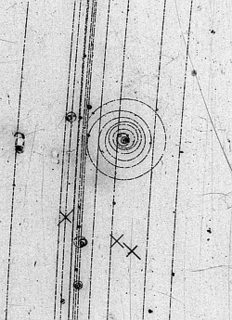 If one knows the bending magnetic field mv^2=Bqv/r one can solve for the mass as as the charge is independently known.

When J.J. Thomson experimented with cathode rays in the 1890s, he measured the ratio of the electronʼs charge to its mass. He was unable to measure either value individually, because he needed to know the other one first. The charge of the electron was measured in the early 1900s by Robert Millikan, and then the electronʼs mass could be calculated.

Not the answer you're looking for? Browse other questions tagged experimental-physics mass electrons or ask your own question.

4
How to measure the mass of the electron?
18
Does electron in wave form have mass?

5
Oil drop experiment--How was the result so accurate?
7
How are the masses of unstable elementary particles measured?
6
Where does the electron get its high magnetic moment from?
0
How small would an electron have to be in order to become a black hole?
1
What exactly is measured in a e.g. hadronic calorimeter - momentum or energy of a particle?
0
Did Feynman ever solve the problem of the difference between bare mass and self-energy of the electron?
1
How close together can an antiparallel magnetic moments free electron pair get?