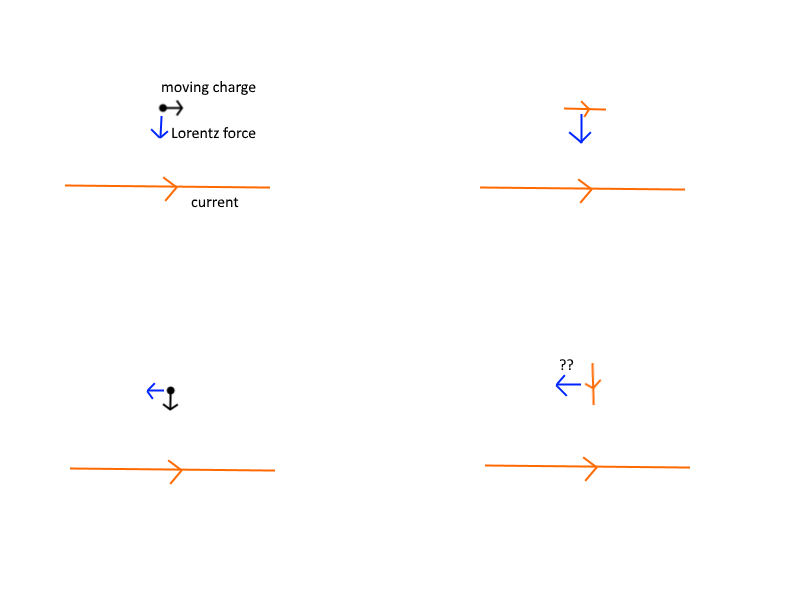 Currents are in orange, moving particles in black, and forces in blue.

Am I right in thinking that the force on the moving particle should be the same as the force on the wire, because the wire has moving charged particles? If so, I have run into a difficulty: according to the wikipedia page on Apere's force law, the force between two current elements is directed along the line between the two current elements, see this equation. This implies that the force is zero if the wires are perpendicular. However, the Lorentz force of a particle moving toward the wire seems to be directed parallel to the wire and nonzero.

Where am I going wrong?

I'm not sure if it is appropriate to answer my own question, but I found the answer. The equation on Wikipedia only applies with two closed circuits. For the force of one closed circuit on a current element it is missing a term. This term vanishes when integrated over a closed circuit. The correct equation for a current element can be found in Comparison of the Ampère and Biot-Savart magnetostatic force laws in their line-current-element forms, equation (1).

3
How can we apply Ampère's circuital law in a wire?
2
Ampère's law applied on a “short” current-carrying wire
2
Does the Lorentz (Laplace) Force Law work backwards?
0
Ampere's law - 2 current carrying wires
2
Is the Lorentz force due to the interaction of a uniform magnetic field and the wire's field?
0
Curl of magnetic field (Ampère's law)
0
Does Ampère's force law apply to a single wire?
2
Lorentz Force on a Current Carrying Wire
0
The history of Ampère's circuital law and Ampère's force law