I have a question concerning the derivation of Noether's theorem in Peskin & Schroeders introduction to QFT. Below is a picture of the first part of it. 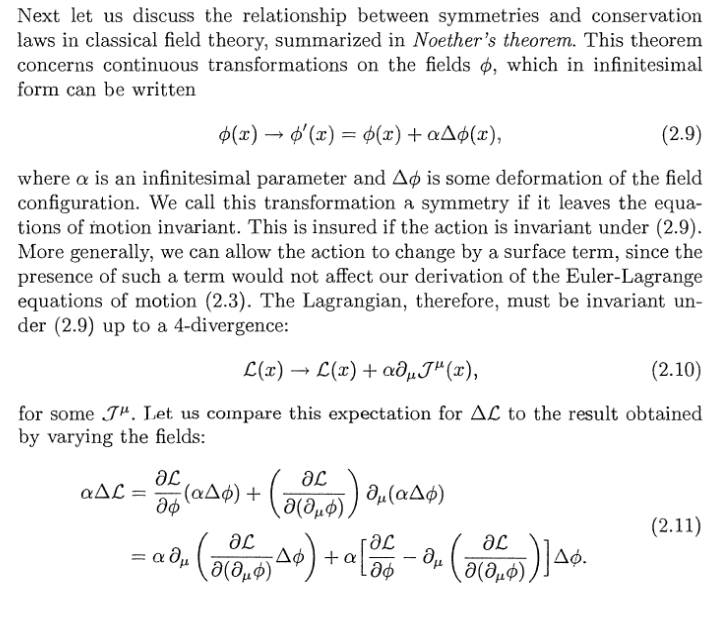 The writing is certainly less clear than it ought to be. Your instincts are right; they just didn't explain it well. In particular, they're not saying that the term in brackets only vanishes for symmetry transformations. It always vanishes for a field obeying the Euler-Lagrange equations.

What they're really saying is:

The text immediately following what the OP included says

This really makes it look like they're saying that $j^\mu$ is identically zero; in fact, I would argue that that's the most reasonable reading of the text. What they should have said is that we get the generic result \begin{equation} \Delta \mathcal{L} = \partial_\mu \left( \frac{\partial \mathcal{L}} {\partial (\partial_\mu \phi)} \Delta \phi \right) \tag{A} \end{equation} whenever $\phi$ satisfies the Euler-Lagrange equations, but to call $\Delta \phi$ a symmetry transformation we require the existence of some other field $\mathcal{J}^\mu$ such that \begin{equation} \Delta \mathcal{L} = \partial_\mu \mathcal{J}^\mu \tag{B} \end{equation} regardless of whether or not the Euler-Lagrange equations are satisfied. Again, (A) is generically true for any differentiable Lagrangian and field satisfying the E-L equations. On the other hand, you have to use the particular form of $\mathcal{L}$ and the particular form of $\Delta \phi$ to decide if (B) is true in any particular case. (Also note that $\mathcal{J}^\mu = 0$ is perfectly acceptable.)

It probably would have been clearer if P&S had begun by moving the explanation of what a symmetry transformation is [the four sentences up to equation (2.10)] to a previous paragraph and expanding on it. Then they could introduce a continuous transformation and show how the Lagrangian changes. But why bother editing a piece of text for clarity, when it's only explaining something as frivolous and useless as Noether's Theorem? ;)

These issues are made much clearer in @joshphysics's version of the proof — in particular with his introduction of separate $\mathcal{J}^\mu$ and $\mathcal{K}^\mu$ vector fields. They look like they perform the same function, and yet they're different, as he explains in the "Important Notes" section at the bottom of his answer, and in some of the comments.

I also highly recommend the excellent "Quantum Field Theory for the Gifted Amateur", which does a typically superb job on Noether's Theorem, and is really what I think should be the standard text. The title is deceptive because it's aimed at professional physicists, just not current professional quantum-field theorists. I encourage you to at least read the other answer, or even take up "Gifted Amateur" if you really want to understand QFT.

Not the answer you're looking for? Browse other questions tagged lagrangian-formalism symmetry field-theory noethers-theorem or ask your own question.