What is “quantization”? Give one example [duplicate]

I just want to know the definition/explanation of quantization in layman's terms. Also an example would be very helpful if provided (not necessary).

Quantum theories don't make that assumption. It turns out that to match what we see in experiments you have to assume that energy comes in lumps (quanta). Changes in energy can't be arbitrary but have to obey rules. Stable systems (like a Hydrogen atom) have specific energy levels and can only switch from one level to another, not from any energy to any other energy. This is why you get spectral lines, not a continuous distribution - they're changes in discrete energy levels.

Quantization (in theoretical physics) covers any mathematical method of developing a theory which incorporates quantum theoretical ideas from a classical concept.

The most dramatic might be Quantum Electrodynamics (QED) which is developing a theory for the electromagnetic field from quantum ideas. The resulting theory can get us back to Maxwell's laws (which are purely classical). QED is horrendously complex for a layman (and not at all easy for anyone else).

The grand-daddy of all quantization models was Einstein's explanation of the photoelectric effect. That's what he got the Nobel prize for, by the way, not relativity. To explain the observations required a model that required energy to be passed in discrete quanta, not like previous classical models.

Most of the answers here are going way over the top into heavy theoretical constructs. For a simple system that is easily understood that demonstrates quantization (that you can even do at home) needs nothing more than a rope under constant tension held fast at both ends. 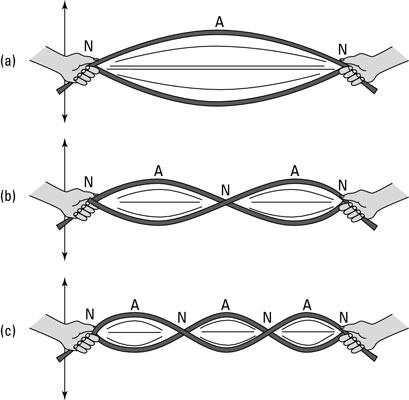 No matter how you try to get the rope to vibrate, it will naturally only support vibration in a quantized set of modes. Because the rope is fixed at both ends (this is what we would call a fixed boundary condition) there are only fixed frequencies that can physically vibrate within those constraints. Image (a) shows the fundamental frequency and the next higher frequency that can exist on the rope is twice that (b), the first harmonic. All vibration frequencies between these values cannot exist on this rope (under fixed tension) because they would require one of the ends to be free to move, which they aren't.

Quantization, then, is any phenomenon like this - where the constraints of the physical system force a certain property to only be expressed in discrete jumps with all values in between physically forbidden. It gets particularly interesting in quantum mechanics, but there are much more easily understood examples of quantization that can also be found in classical mechanics like this.

To put it in straightforward terms, quantization is something that occurs in physical systems when we move from the world of large objects (like bowling balls) into the world of very, very small objects (like electrons, for example). In the "big world", an object like a wheel or a top can possess any value of spin that we wish to give it, but in the world of very, very small objects like electrons, we notice that the electron can possess only one specific value of spin: in the units that physicists use, the electron's spin is 1/2 and can never be 15, 1,000, 43.5 or anything else. We say that for subatomic particles, spin is quantized. Furthermore, if that electron is part of an atom, then the energies that it can possess are not continuously distributed, but instead are strictly quantized: to shift an electron from one energy level to another in an atom requires that the electron absorb or emit an amount of energy which is quantized. The scale of this fundamental "chunkiness" in the subatomic world is set by a number called Planck's constant, which is an extremely tiny number. This means that this chunkiness is apparent only when dealing with extremely tiny things- and is completely nonapparent when dealing with things as large as bowling balls. If Planck's constant were instead zero, then quantization (as well as the basic structure of the world we inhabit) would not exist.

Not the answer you're looking for?Browse other questions tagged quantum-mechanics discrete quantization or ask your own question.

17
What is Quantization?
11
Electron shells in atoms: What causes them to exist as they do?