What is the physics behind the plasma frequency?

I can't seem to find a satisfactory, intuitive explanation for the way electromagnetic waves behave when they encounter a cold plasma (that is, one where $\omega^2 = \omega_p^2 + c^2 k^2$). My intuition for the behavior below the plasma frequency is that the incoming wave makes the electrons in the plasma oscillate in such a way that they generate radiations that cancel the transmitted wave and create a reflected wave in the opposite direction (is that right?). I also understand that at very high frequency the electrons don't respond fast enough making the plasma behave like a vacuum. However the existence of this very sharp change in behavior, and what happens beyond the plasma frequency, stumps me.

Your understanding is basically right. A helpful way to understand the boundary where $\omega = \omega_p$ is to look at the refractive index,
\begin{equation} n=\frac{c}{v_{p}}=\sqrt{\frac{\epsilon \mu}{\epsilon_0 \mu_0}}\approx\sqrt{\epsilon_r}\,, \end{equation} where $v_p$ is the phase velocity and I have taken $\mu_0\approx \mu$.

For electromagnetic (EM) waves incident on a cold unmagnetized plasma the ions can be assumed to be at rest relative to the electrons due to their inertia. The much lighter electrons move more readily in response to the electric field of an EM wave. The displacement $x$ between an electron and ion due to the EM wave creates an electric dipole moment, which affects the plasma's relative permittivity $\epsilon_r$,

Now we consider the various cases depending on the frequency of the EM wave. Generally, in a cold plasma the electrons are able to respond to the EM wave on a characteristic timescale of $1/\omega_p$:

I hope this explains the sharp frequency dependence of the reflection and transmission coefficients. For a good description of radiation in a dielectric, I recommend reading this answer.

Plot of the dispersion relation for EM waves in a plasma: 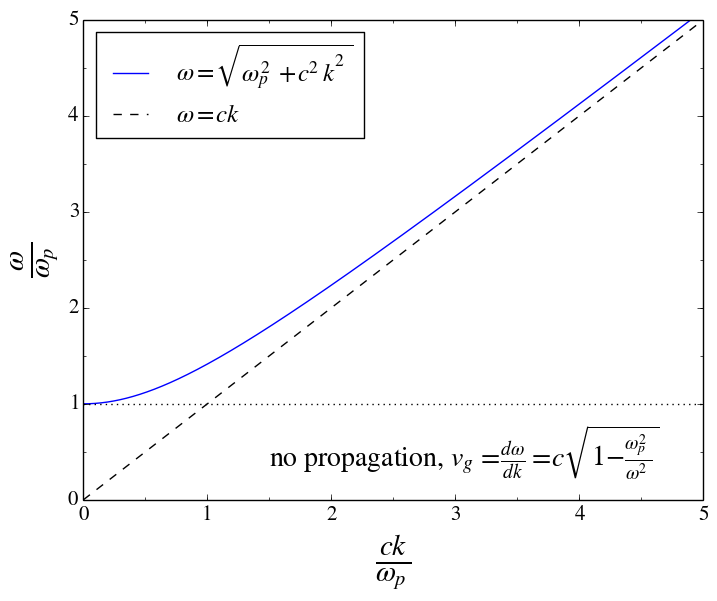 24
How does a photon travel through glass?
13
The interstellar medium reflects extremely low-frequency radio waves. Could we use this fact to build a more efficient photon rocket?
1
Electromagnetic waves in a plasma

2
Plasma frequency
13
The interstellar medium reflects extremely low-frequency radio waves. Could we use this fact to build a more efficient photon rocket?
11
Do radio beams self-focus in the interstellar medium?
2
Collective dipole oscillation and specular reflection
0
Can we predict harmonic generation from Maxwell's equations?
1
What happens to Langmuir waves at a density gradient in plasmas?
2
Effective Lorentz Factor in Cold Plasma, Razin Effect