How do boat thrust reversers work?

Thrust reversers are commonly used on aeroplane jet engines, to generate backwards thrust. They work by directing the hot, high speed exhaust forwards instead of backwards. At a basic level, the air has a net momentum gain forwards because the incoming air is slow (and dense), but the outgoing air is fast (and less dense), so the engine has a net momentum gain backwards. This makes sense to me (and I hope it's right). 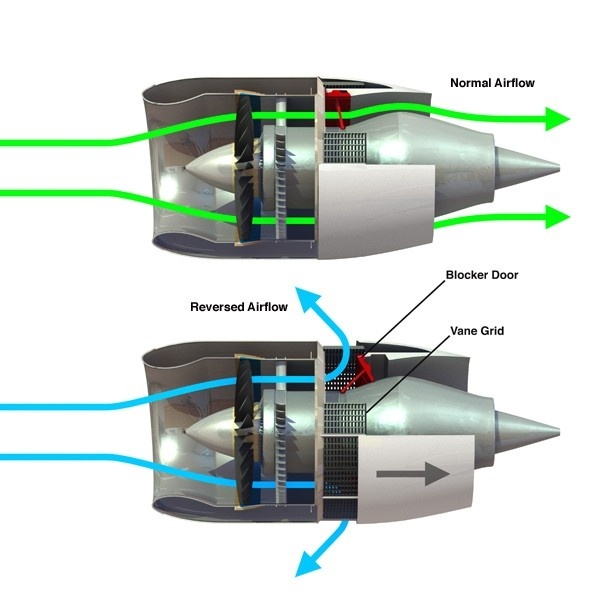 Boats also apparently have the same system, however I don't understand the physics. Since water is basically in-compressible, the water coming in cant be less dense than the water going out. This must mean that the water coming in is travelling at the same speed as the water going out, so there is no net momentum change. Am I being dumb? It seems like you could just connect a pipe directly from the exhaust to the intake and it would be the same. Is the main slowdown from something different, like the drag inside the intake or something? 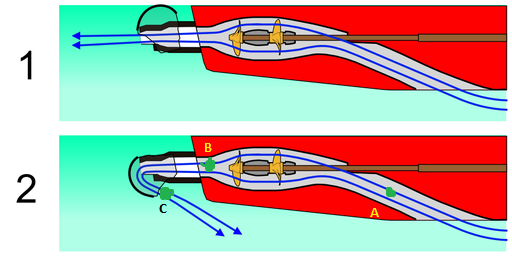 edit: is momentum the wrong thing to be thinking about here? maybe its to do with the fact that at the inlet, the water is coming from all directions on the surface of the hull, but at the outlet it's all going in one direction?

The change in speed of both the wind and water is due to the props in the engines, which you can see as the ‘fan blades’ in your linked diagrams. They push the fluid through the system (rather than just having it flow straight through an empty pipe), causing the outgoing fluid to have more velocity than the incoming fluid.

In the case of the thrust reverser, they simply angle the exhaust direction such that the fluid is being ejected in the opposite direction, reversing the direction in which the generated force is being directed.

Think of the propellers as rotating wings. We can apply the same principles to the propeller as we do the wing of an airplane, which tell us that there will be an area of lower pressure in the exhaust direction. We can then apply Bernoulli’s Principle to show that the velocity of the outflowing water will be larger than that of the inflowing water.

In order for this to be sustainable, the outflowing water must push out of the exhaust pipe into the surrounding area with some force. Newton’s Third Law will then tell us that this ejection will cause the vessel to receive a force acting opposite to the exhaust direction.

Due to the pressure change across the propeller, the velocity of the fluid will not be the same at all points in the process (it will become faster as the fluid passes through the propeller).

The size of the nozzle at the end of the process is smaller than the water intake, which allows for the change in momentum of the water exiting the system.

A key thing you are missing here is that you do not need any obvious density differential to create a pressure differential. Liquids are of course compressible but it takes a lot more energy to decrease their volume by a given amount. That way, a tiny amount of compression stores a lot of energy in a liquid, whereas you would need to compress a gas by a considerable amount for the same energy. Since I am not very familiar with the formal theory of fluid dynamics, you would have to wait for a professional to answer this formally. I'm sure it hides somewhere in the Navier-Stokes equations. But as a start, look up compressibility, which is a measurable property of a fluid. To put it in simple terms:

But what I now wonder is: Is there a way to explain the forward thrust without invoking pressure changes, just with pure Newtonian Physics?

I realize now that I was being a bit dumb. All of this stuff that we went into in chat is actually not relevant.

There are only two places where the momentum change of things is relevant: At the propeller and at the thrust reverser.

You can ignore everything about the pressure and compressibility of water and just think of it as a particle system.

If you imagine that the propeller takes a non-moving particle of mass a and throws it backwards at speed -b, the propeller adds the momentum ab=C to the boat, and a(-b)=-C to the particle.

When the particle hits the thrust reverser, its speed changes from -b to +b, so its momentum changes from -C to +C, subtracting 2C from the boat momentum, giving the boat overall a momentum of -C, decreasing it's speed.

Not the answer you're looking for? Browse other questions tagged fluid-dynamics momentum water or ask your own question.

2
Fluid mechanics of aircraft at 10000 m
3
The Spinning Log “Perpetual Motion” problem, and my attempt at a solution
5
Water Waves in the Wake of a Boat
6
How does water pressure manifest itself on the molecular level?
0
How is Linear Momentum different from Thrust?
0
How does a pop pop boat work?
1
How does rocket thrust work?
9
Why Does A Ramjet Produce Net Forward Thrust
2
What might cause water vapor to move against the flow of air in an enclosed space?