If gravity can be disrupted by larger forces, why does the moon orbit the Earth instead of the Sun? [duplicate]

Ask Question
Asked 3 years, 5 months ago
Active 3 years, 3 months ago
Viewed 282 times
2
$\begingroup$
This question already has answers here:
Why does the Moon not revolve around the Sun directly? (5 answers)
Closed 2 years ago.

I read an thread on this site about how a larger gravitational pull can overpower a smaller gravitational pull. I took this to mind, and I started wondering why the moon orbits the Earth instead of the Sun. What I think the answer is is that the moon is much closer to the Earth than the Earth is to the sun, likewise humans stay on Earth instead of being drawn to the sun or the moon. Can somebody please prove me wrong?

And when we put the actual numbers in it turns out that :

So on the face of it the Sun is indeed exerting twice as much force on the Moon than the Earth does.

So what's the explanation ?

Well they're not simply two bodies sitting still at those distances - which is what those numbers are describing. They are moving objects and they have some effect on each other as well.

Now neither the Earth nor the Moon are big enough to affect the Sun's motion much - there is a small effect but it's not not significant.

But the Earth and the Moon are large enough to effect each other's motion and they both have a net motion which is such that they move in an orbit around the Sun together.

The Earth and Moon both have an average velocity that is around the Sun at about $30\,km\,s^{-1}$. Now the Moon has an additional motion relative to the Earth of about $1\,km\,s^{-1}$ (note the much smaller velocity) in it's orbit.

Now the Earth also has it's motion about the sun altered by the Moon and it also describes a path that's a little wiggly, but it's not as obvious because it's bigger and wiggles less.

There is a nice diagram in this blog post on the subject showing an exaggerated the way the Moon actually orbits the Sun. I'll link to it here : 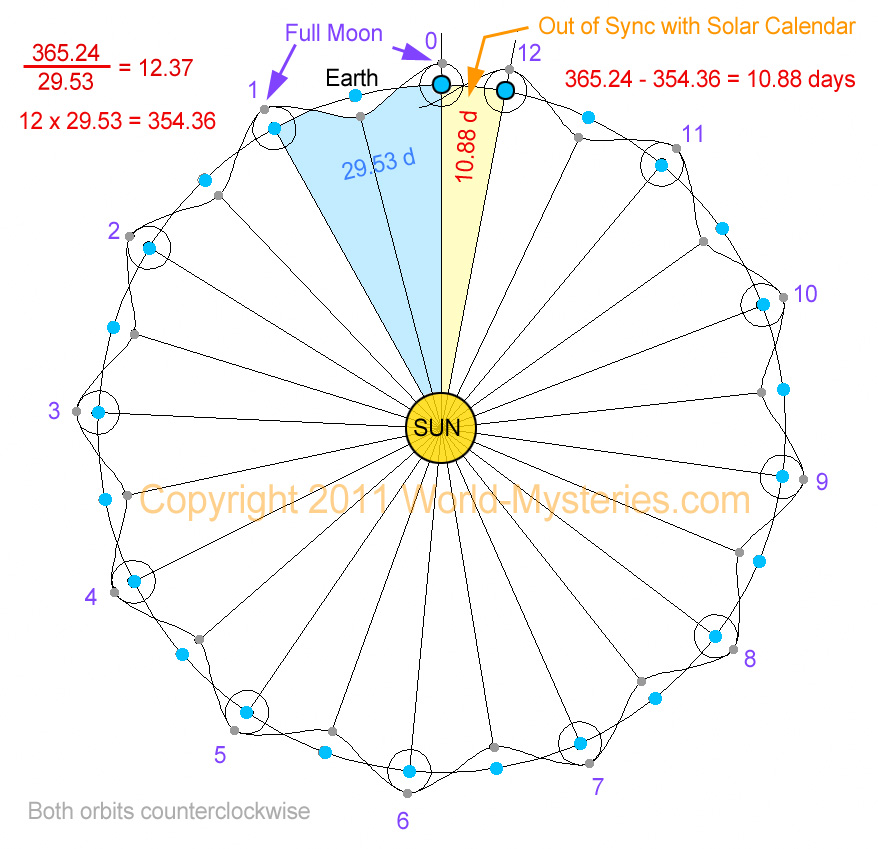 I took this to mind, and I started wondering why the moon orbits the Earth instead of the Sun.

There is another aspect to this. It is thought the Moon was created when the early Earth collided with another large object in the early solar system. The result was that two bodies formed after the dust settled (so to speak). One as the Earth and one was the Moon.

So the way the Moon was formed may have had some effect on why they are closely bound together now.

But keep in mind we're not sure if the Moon was formed in this way, but it's a good contender for the explanation.

What I think the answer is is that the moon is much closer to the Earth than the Earth is to the sun,

The way to make sense of this is to remember that the relative velocities are important. It's not just the distances - it never is with orbits - it's the velocities and directions they're traveling as well.

As described in L. Maynard's answer to your question, the issue is escape velocity.

The small velocity of the Moon relative to the Earth is not enough to escape from Earth. There isn't enough energy available in kinetic energy to overcome the potential energy.

The Earth-Moon-Sun system is a three body system and it's impossible to exactly solve a three body problem like this in a simple mathematical way. As it happens the relative sizes and velocities involved means we can use a pretty simple approximation using the concept of Barycenter. Instead of trying to model the complicated interactions of all three bodies we treat the Earth-Moon as one body centered on it's barycenter and the Earth-Moon as almost independent of the Sun for the purposes of calculating their relative motions. Not all three body problems can be done this way.

likewise humans stay on Earth instead of being drawn to the sun or the moon. Can somebody please prove me wrong? Thanks!

Not likewise, but in this case humans are actually experiencing much more force from the Earth than the Sun. We can use a similar formula to the one above and this time we get :

So simply the fact we're so much closer to the Earth than the Sun makes the Earth our boss ! We can't be pulled off the Earth by the Sun.

But again the fuller picture (which of course doesn't change the net result much) is that we're moving with the Earth in it's orbit and share that orbital velocity and we're Earth also rotates on it's axis.

With the article you read, what can be stated more generally is that the net force on an object is made up of all the forces acting on a particular object, in this case, the Moon.

For the case of gravitation, this is described in by the following equation for each of the forces involved:

One can run through the numbers to answer the question. In fact, one finds that it is not that the moon is much closer to the Earth. From the above equation, it becomes clear that the large mass of the sun more than compensates for the closeness of the moon to the Earth.

You will also find that the Sun pulls on the Moon twice as hard as Earth does.

So, to restate your question in another way, why doesn't Moon escape Earth?

The answer to this has to do with escape speeds. To escape orbit around the Earth the Moon has to be traveling at or above an escape speed. One can find this escape speed from the following equation:

Even though the Moon does not escape the Earth, it is moving farther away. This is due to tidal interactions between Moon and Earth.

Not the answer you're looking for? Browse other questions tagged newtonian-gravity earth sun solar-system moon or ask your own question.

6
Is there a simple yet accurate formula for where on Earth the Sun and Moon are directly overhead?
3
Which will collide first, the moon and Earth, or Sun and Earth?
2
Moon Gravity Vs Earth Gravity Pull
1
What happens to the water on the surface of the Earth if the Earth is not rotating about its axis in the Earth-Moon system?
33
Is there a maximum distance from a planet that a moon can orbit?
0
Tidal forces between Moon and Earth
2
How big a coincidence is the Sun and Moon having almost equal apparent sizes?
0
In the difference between the sun and moon's tidal effects on earth, is density or distance a larger factor?