How hard is it to have loops in quantum architectures?

I recently discovered IBM's website where you can write a quantum circuit that acts on a few qubits, simulate it, and have it executed on an actual quantum architecture. (You submit your computation for execution, and you receive an email when it has been processed)

I tried doing writing a simple circuit that plays CHSH with itself when I noticed something: I couldn't write CNOT gates a freely as I wanted. That is, I had 5 qubits, and they could only act on each other as follows: 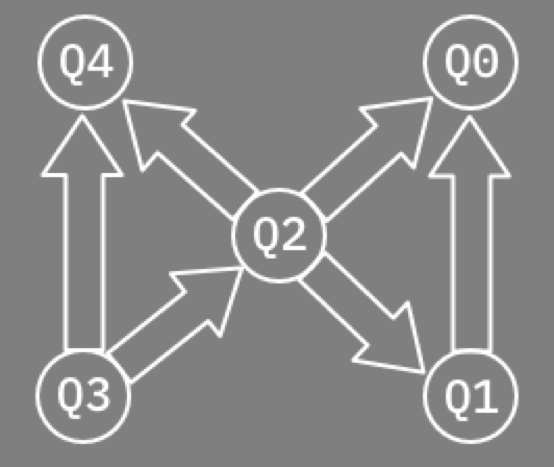 They call this topology a bowtie.

What bothered me with this was that there is no loop in the graph of "what qubit can act on another qubit". And their two other architectures (of 5 and 16 qubits) have the exact same issue. They are all directed acyclic graphs, and that greatly reduces what kind of circuit we can do. An example of something very simple that we cannot do on such architectures is swapping two qubits. EDIT: we may need more gates for the same computation, but we can do the same computations.

On their ibmqx4 manual, they explain that this comes from the fact that:

The IBM Q experience uses the cross-resonance interaction as the basis for the CX-gate. This interaction is stronger when choosing the qubit with higher frequency to be the control qubit, and the lower frequency qubit to be the target, so the frequencies of the qubits determines the direction of the gate.

Do all proposed architectures have the same issue? How strong of an effect is this difference of frequencies (could I at least have somewhat bad CNOT gates in the other direction)? It is hard in general to have loops in quantum architectures, and is there a theoretical reason for it?

It is not hard in general (or fundamentally), although it may be hard for a wide range of superconducting architectures, that I'm not so sure about. In ion traps, for instance, the connectivity graph is usually all-to-all (see here for one group that doest that sort of work) and undirected.

As an aside/matter of algorithms, if you conjugate a CNOT interaction with Hadamard gates, the target and control are effectively flipped -- see Exercise 4.20 in Nielsen and Chuang, or this circuit diagram on Wikipedia. So as a matter of engineering, you can change the circuit a bit to get the CNOTs you want.

Not the answer you're looking for? Browse other questions tagged quantum-mechanics quantum-computer or ask your own question.

5
Entanglement of qubits circuit- Bell states
5
Scaling of quantum error correction
2
CNOT gate broken in 2 different quantum simulators? Or am I wrong?
4
Is QC with Superpositioned Quantum Gates any different than normal Quantum Computation?
2
Create a qubit in |0> state with a quantum circuit without invoking measurement
0
Why Do Multiple Hadamard Gates Return to Base State?
4
What is going on inside quantum gates physically?