Polarization state of a photon

From the book "Quantum Field theory and the Standard Model":

"It is known that light has two states of polarization".

What does this statement mean? What are the two states of polarization and how do we know that? Is there a deep significance associated to it from the perspective of Quantum Field theory?

The polarization of light is just the orientation of its propagation direction with respect to corresponding electric (magnetic) field. From Maxwell equations follow that since free EM field is transverse and has only two independent components, there are only two possible independent polarizations. One of possible basis choice is left and right circular polarizations.

From the other side, witnin the theory of representations of the Poincare group the massless representations are characterized by the values of helicity, which is the projection of the total angular momentum on the direction of motion. It is possible to derive the equation of motion for the field representing the massless particle with helicities $\pm 1$ (which, as we know, corresponds to the photon). It can be found that there is the direct relation between left and right circular polarization and left and right helicity. See the details here.

You ask a diffizil question.

Let us take the example of radio waves. The electrons in the antenna rod get accelerated back and forth and by this they have a common electric field, which oscillates (for a vertically built rod) vertically. The radio wave is polarized by its electric field.

The same result one get if a polarizer foil or simple a narrow enough slit is used. For some range of wavelengths the well designed polarizer foil rotates -from light with equal distributed electric field component (around 360°) - 50% of the light parallel to the slits and let this polarized light through.

But there is a second possibility of the development of the two field components. To illustrate this I placed two sketches of the near field of the antenna radiation: 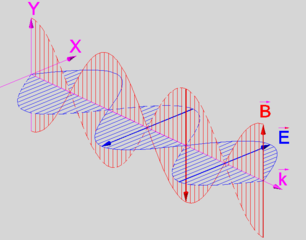 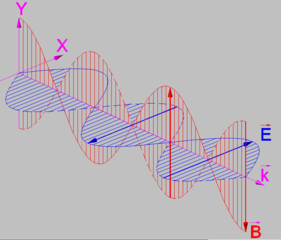 light has two states of polarization ...

... has to be rephrased to “Photons have two values of the intrinsic spin, right handed and left handed”.

Not the answer you're looking for? Browse other questions tagged electromagnetic-radiation photons quantum-electrodynamics polarization helicity or ask your own question.

74
Why is the $S_{z} =0$ state forbidden for photons?
1
Specifying the state of polarization of a photon, a classical polarized beam of light, and connection with $\textbf{E}\pm i\textbf{B}$
2
why is it that only the perpendicular component of a wave can pass through a vertical polarising filter?