While I was reading up about mean life I came across a common definition.

It is the average time taken by an arbitrary radioactive nucleus to undergo decay (since different particles may take different times). But radioactivity is an exponential function or phenomenon. Therefore I feel that there will always be that one nucleus that hasn't decomposed, making its life infinity. Therefore the mean life (being the average value of individual lives) must also always be infinity, right?

Can someone tell me what's wrong in this logic?

Perhaps looking at the probability distribution function which characterises a radioactive decay process might help?

The basic premise when dealing with radioactive decay is that there is a constant parameter $\lambda$ locked away in a nucleus which dictates the decay of the nucleus.

You perhaps first meet it when it is stated that the rate at which nuclei decay $\dfrac {dN}{dt}$ is proportional to the number of undecayed nuclei $N$ which leads to the expression $\dfrac{dN}{dt} = - \lambda \,N$.

Another way of expressing this is to use a probability distribution function for the decay. 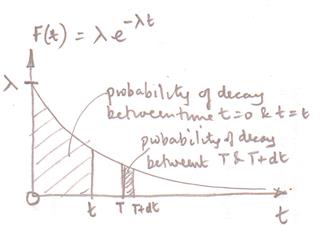 You observe one nucleus and start a clock ($t=0$).

The probability of the nucleus decaying within a time $t$ after starting the clock is $\displaystyle \int^t_0 \lambda \, e^{-\lambda t} \, dt$ ie the area under the probability distribution curve between time $0$ to time $t$.

Another way of stating this that after a time $t$ the probability of the nucleus decaying in the next interval of time $dt$ is $ \lambda \, e^{-\lambda t} \, dt$.

As an example if I want to know how long one has to wait $\tau$ for the probability of a decay to be $\frac 12$.

which produces the relationship between $\lambda$ and $\tau$

Put another way this is what you would get if you started with an infinite number of nuclei and watched them decay over an infinite length of time.

What this shows is that you are working out a weighted average and the weighting for large values of time are very small so much so as for them to be insignificant on any realistic time scale.

The usual expression for the number of nuclei remaining after a time $t$ is:

where $\tau$ is related to the half life by:

And as you point out this implies that $N(t)$ never reaches zero so there must be at least one nucleus remaining.

If we have just one nucleus then all we can say is that there is a $50$% chance that the nucleus will decay within a time $t_{1/2}$. The probability that the nucleus remains undecayed goes to zero as $t$ goes to infinity.

Not the answer you're looking for? Browse other questions tagged radiation radioactivity proton-decay or ask your own question.

16
Why is this way of calculating mean life of radioactive atoms incorrect?