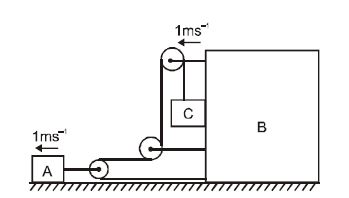 In the given question, I'm required to figure out the velocity of block $C$, given that both blocks $A$ and $B$ move towards left with velocities $1$ $m/s$ each.

Its easy to figure out that in horizontal direction, as block $C$ is in contact with block $B$, it would move with $1$ $m/s$.

Doubt: How can I possibly find the velocity of block $C$ in the vertical direction. I know I have to relate the motion of blocks with the pulleys, but how can I possibly do this? Also, if I'm assuming the tension as $T$ in the longest string, what would the tensions in the other smaller strings? How can these tensions be related to one another?

I've literally tried to answer this question for 2 weeks but I'm failing time and again. Please let me know the general approach to solve problems of similar type, also if you happen to solve it just by simple observation , please let me know the logic . This really matters to me. Thanks for giving this your precious time

EDIT :Can I use the method in the answer in this post to solve this problem ? If yes , then how and if no then why not ? I tried but I couldn't solve it by this . Finding the acceleration of Block attached using tricky string setup

Given that all three blocks $A, B, C$ are moving left with the same velocity, and that the string attached to $C$ is fixed at the other end to $B$, and that all of the pulleys are fixed to blocks $A$ and $B$, the only way block $C$ could have a vertical velocity would be if blocks $A$ and $B$ had differing velocities (changing separation).

We know that $A$ and $B$ are moving with the same velocity, which means that the string cannot love around any of the pulleys. Therefore, $C$ has no vertical component of its velocity.

In The Case of Differing Velocities

This problem is made simpler by the fact that all of the pulleys cause the string to turn at right angles.

In the case of, for example, block $B$ moving left at $4\text{ms}^{-1}$, the velocity of the leftmost pulley relative to the two rightmost pulleys is $3\text{ms}^{-1}$ to the left. The means that the length that the string has to travel to pass through the pulley system is decreasing by $6\text{ms}^{-1}$.

Since the string remains the same length, but the path through which it must travel does not, this allows block $C$ to have a vertical component of its velocity of $6\text{ms}^{-1}$ downwards.

Not the answer you're looking for? Browse other questions tagged homework-and-exercises newtonian-mechanics kinematics string or ask your own question.

3
Why & how do bodies attached by extensible strings move with common acceleration?
1
Blocks and pulleys problem with friction - the condition for sliding
1
Dealing with pulleys and strings with mass
1
Determining tension and free body diagrams for a three-stage linear slide
0
Effects of friction on a system of bocks
2
Why can't I choose blocks attached with pulley B as a system?
0
Pulley system constraint equation