Has a nuclear "neutron halo" been measured directly? Anything other than "breaks easily"?

update: The following have been found in Neutron Halo - Recent Experimental Progress at RIBF, Vol. 8, NO. 5 of the AAPPS Bulletin

The AAPPS Bulletin explains how the momentum distribution of 20C + 2n breakup is additional evidence of a 2 neutron halo (along with the small 2 neutron separation energy of only 0.14 MeV) but I can not follow the argument.

Halo nuclei are generally very light nuclei with a significant neutron excess. These isotopes usually decay in seconds down to milliseconds, and so are often observed as individual ions in motion. Most of the data are scattering and reaction cross-sections calculated from radioactive beam on target experiments. These isotopes are at the extreme limits of particle stability near the "neutron drip line" and the binding energy of the last one or two neutrons is usually very small compared to most nucleons.

According to the Phys.org article Experiments reveal a neutron halo around neutron-rich magnesium nuclei:

Neutron halos are a dilute cloud of neutrons that surround the more tightly packed neutrons and protons found at the center of a nucleus.

The researchers used RIKEN's Radioactive Isotope Beam Factory to produce nuclei of magnesium-37, consisting of 25 neutrons and 12 protons. To examine its properties, the researchers observed what happened when these nuclei were bombarded against a lead target. "We found that the magnesium-37 nuclei broke up easily into a magnesium-36 core and a single neutron," says Kobayashi. "Thus, we concluded that magnesium-37 has a neutron halo." (emphasis added)

Lead target nuclei are highly charged and this breakup may be caused by coulomb excitation sufficient to liberate the weakly bound neutron. Having a large reaction cross-section alone doesn't necessarily mean by itself that the magnesium-37 nuclei have a large physical cross-section or a large "halo". I understand that it might suggest the neutron may have a slightly larger wave function than other nucleons, but with a short-range nuclear potential, that should not be very much.

Have these halo's ever been demonstrated in non-nuclear reaction experiments, possibly with atoms at rest? Is there something more than "they break easily"? 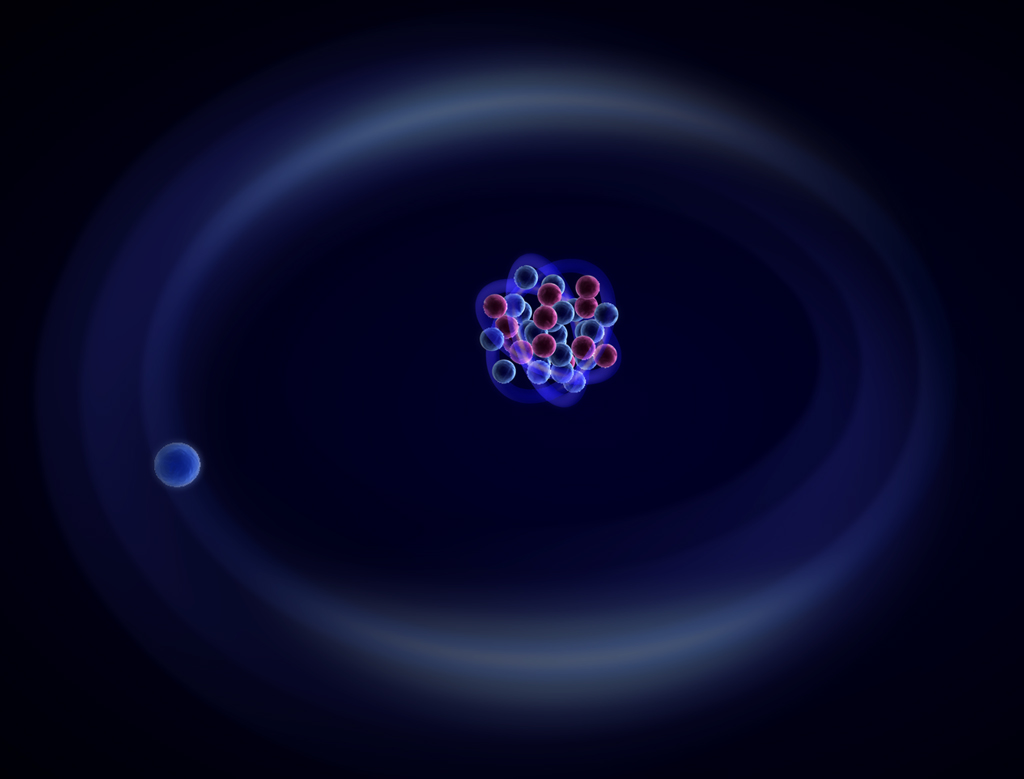 The PREX and CREX experiments at Jefferson Lab are efforts to measure separately the neutron and proton charge radii in lead and calcium. The proton (charge) radius comes from the total scattering cross section. Since the neutron's weak charge is much larger than the proton's, and the weak interaction is parity-violating while the electromagnetic interaction isn't, it's possible to extract the neutron radius from the parity-violating part of the scattering cross section. This technique has given about 0.33 fm neutron skin thickness in lead-208. Note that the volume of the lead-208 neutron skin is larger than the entire volume of a lithium-11 halo nucleus; it's a thin skin, but on a big surface.

The halo nucleus discovery paper (1985) reported somewhat more distance, $0.8\pm0.2 \rm\,fm$, for the difference in matter radius between lithium-11 and its cousins lithium-6 through lithium-10. That paper uses a simple model where the interaction cross section is essentially the physical cross-sectional area of the nucleus (which doesn't sound all that terrible for a contact interaction). That early paper uses some more sophisticated models to try to extract both charge and neutron radii for its beams, and suggests that the charge radius and neutron radius for that specific isotope are only different by about 0.3 fm, but whether that difference is significant or not depends on how you read their error bars.

A few papers (lithium-11 in 2005, beryllium-11 in 2008 and -12 in 2012) extract the size of the charged part of halo nuclei by looking at shifts in the electronic spectrum due to interactions between the electron cloud and the finite-sized nucleus. Those results suggest that the charged part of the halo nuclei are a little bigger than their non-halo neighbors, but not nearly enough to explain their larger interaction cross sections.

Unfortunately it's going to be hard to do better than that approach: a measurement of the effective nuclear size from the scattering cross section, and a measurement of the charge radius from the electronic spectrum, and modeling to connect the two. To first order, the neutrons don't interact with the electrons electromagnetically, and the parity-violation trick would require you to produce a chemically significant number of the rare isotopes.

Also note that the magnesium paper you refer to (not the press release on the phys.org content farm) is substantially more complicated than "they break easily." While the paper does report neutron separation energies and neutron emission cross sections, most of the text is devoted to arguing that the final neutron is in a so-called $p$-wave orbital --- like the halo neutrons in lighter nuclei. Low orbital angular momentum is apparently set out as a condition for a "halo" nucleon in this review, which I have not read.

0
Why would electrons have Weak Charge?
4
Gamma spectroscopy - Table of radioactive isotopes with gamma energy search
4
Why would antiprotons be particularly sensitive to "halo neutrons" as described in this Nature news item?
1
Is the nuclear mass density constant for different nuclei and shape of the nucleus

4
Why 3He(n,p)3H nuclear reaction proceeds but 3He(n,gamma)4He heavily suppressed?
5
Why did they need such short lived isotopes to find pear shaped nuclei?
0
Proof of actual collisions in beam collision fusion?
4
Why would antiprotons be particularly sensitive to "halo neutrons" as described in this Nature news item?
1
Lead catalyzed fusion
3
Can muons be used to reach the island of stability of superheavy elements?