I am trying to understand the X-ray emission spectrum based on medical X-ray tubes and there are several variants of the graph function given in several books as in this image: 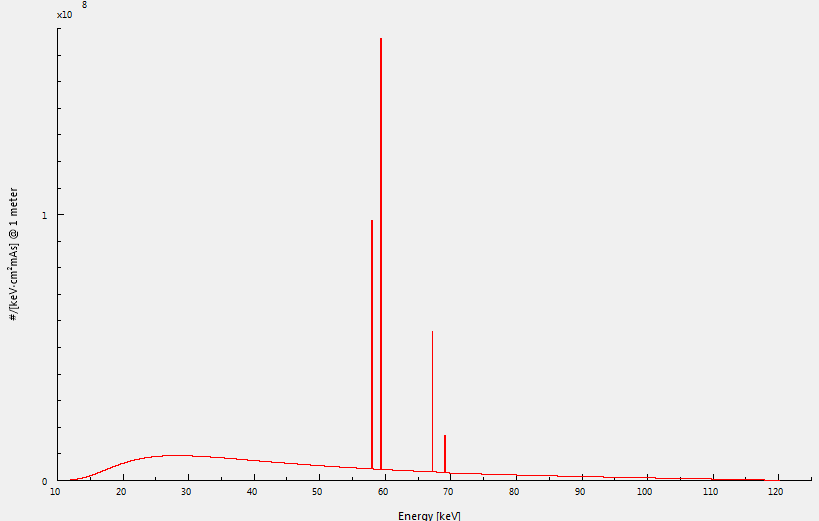 My question is regarding the units of the dependent variable of the graph function. How is there a $KeV$ unit added to it?. Shouldn't the number of photons have the units of $Hash/ [cm^2 *mAs]$ where, the photons cross an area over a particular current-time product and therefore $cm^2*mAs$ in the denominator is understood but why a KeV term(unit) is also present?

What you've plotted here is a differential spectrum: the number of x-ray events observed in each energy window from $E_i$ to $E_i + \Delta E$. The most common way to construct such a spectrum is to build a histogram. But in a histogram, the number of events in each bin depends on the width of the bins, $\Delta E$. For example, if you start with a histogram that has 100 energy bins, decide it's too noisy, and combine the odd bins with their even neighbors to produce a new histogram with 50 bins, the number of events in each bin will approximately double. But you haven't changed your data, in that case, just your representation of that data.

You can avoid that blurring between data and representation by displaying, rather than raw counts per bin, the counts divided by the bin width. In our $100\to50$ rebinning example, the number of counts in the larger bins would approximately double, but the width doubles as well: the differential spectrum doesn't change.

Essentially, each point in your spectrum here is $$ \frac{dN}{dE\cdot dA \cdot dt\cdot dI} $$ where the integral of this spectrum, $N$, is the total number of events you'd expect from the experiment. You're not bothered by the fact that if you ran the experiment twice as long, or used a detector with twice the area, or drove twice as much current through the source, that you'd double the number of photons you find. For energy the relationship is nonlinear: the total number of events is $N = \int \frac{dN}{dE} dE$, and what's plotted here is the differential $dN/dE$.

I learned this as a graduate student when I tried, unsuccessfully, to turn a plot of neutron flux versus wavelength, $dN/d\lambda$, into a plot of neutron flux versus energy, $dN/dE$, using the de Broglie relation $p = h/\lambda$ and the kinetic energy $E = p^2/2m$. You can't just re-map the points on the spectrum to the new values; you have to take into account that the denominator is different as well in order to have the two spectra integrate the to same $N$.

Not the answer you're looking for? Browse other questions tagged particle-physics atomic-physics x-rays or ask your own question.

2
How do you convert between different units of particle flux?
2
Why do we plot distributions (histograms, etc) per logarithmic interval (i.e. per “dec”/“dex”)?

2
x-ray in oil droplets experment
1
How to distinguish between the spectrum of an atom in motion and the one of a scaled atom?
1
Property of $Cu$ so that it is used as target in in X-ray diffraction (XRD)?
0
Why is lead used for X-ray cladding equipment?
1
X-ray spectra: the strength of the lines?
1
Bandwidth of characteristic X-ray lines
0
What operation is used to construct single image of dual-energy x-ray scanned object?
2
Atom-electron interaction in an x ray tube
1
Nomenclature of X-ray transitions-Siegbahn Notation