What sound frequency can be heard the greatest distance by humans?

What sound frequency can be heard the greatest distance by humans? Assuming a pure tone, single frequency, same source SPL (dB) for each frequency, outdoors with no obstacles between source and listener. I believe the answer would be the result of the combining the effects of atmospheric attenuation as a function of frequency, humidity, and temperature and the perceived loudness by humans as a function of frequency. I think the answer would be in the range of 2kHz-3kHz.

Cool question! I've been curious about this problem for a long time, but I've never spent the time to actually try the calculations. Note: I arrive at a different conclusion than @niels neilsen by adding the atmospheric absorption part.

At long distances, molecules in the atmosphere (mainly diatomic Oxygen and Nitrogen) act as a sink of acoustic energy and thus filter acoustic signals. The effect is most pronounced at high frequencies.

Where I live a typical summer day is about 13° C and 70% relative humidity. A typical atmospheric pressure is 96 kPa. The effect with distance due to atmospheric absorption is as follows: 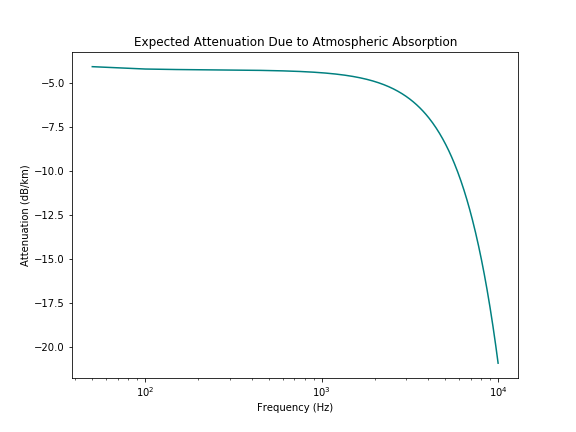 (The code I used to make the calculations is here, in case you want to tweak things for your part of the globe. Otherwise you're going to have to take my word that the general shape of the curve doesn't change much with temp/RH/atmospheric pressure and my answer is generally applicable.)

In any case you can see that high frequencies are significantly influenced at distance.

We can imagine a source of white noise that, by definition, has equal acoustic intensity at all frequencies. That's convenient because we can continue to scale the attenuation with atmospheric absorption until it becomes inaudible. That is, where it intersects the ISO 226:2003 equal loudness contour for the threshold of human hearing. 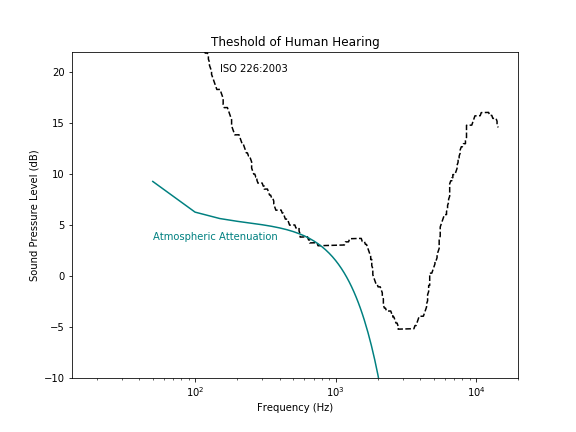 By this approach it would appear that at least for atmospheric conditions in my neck of the woods the last remaining audible frequency would be somewhere around 700 Hz.

Disclaimer: I'm not sure how often atmospheric absorption would be the limiting factor outdoors. More likely your source would be attenuated by terrain or ground effect well before you got far enough away for atmospheric attenuation to do the job. Additionally your sound source may be masked by other ambience before you could get far enough away for atmospheric attenuation to matter this much. Then the last frequency you would hear would depend entirely on the environment you were in.

You ear has a frequency response peak at about 3kHz, meaning that this frequency will be easiest to hear over long distances. In comparison, your ear's response to bass frequencies is much weaker, and to make them as audible as a distant sound source at 3kHz requires much more acoustic power. This among other things is why a bass guitar amplifier needs about 5 times the power rating as a guitar amplifier to seem approximately as loud to your ear.

Not the answer you're looking for? Browse other questions tagged acoustics frequency distance biology or ask your own question.

62
Do low frequency sounds really carry longer distances?
5
Is there a resonance frequency to air itself?

41
How much information about the scale of a waterfall can be obtained from its sound?
0
Does sound absorption depends upon the amplitude of sound wave?
61
Why does our voice sound different on inhaling helium?
3
How to find the first-harmonic frequency from the frequency spectrum of a recording of this harmonic being struck on a guitar?
4
Why is root mean square pressure used in the definition of sound pressure level?
6
If I can hear Bob, can Bob hear me? (AKA, why does the Green's function for sound propagation have to be symmetric?)
1
How can a loud sound's perceived pitch differ from its predicted value from only its frequency?
1
Moving sound sources and wavelength
6
Are monochromatic EM waves supposed to be sinusoidal?