When we derive Snell's law using Huygen's principle, after refraction, we draw a perpendicular line from the point of intersection of the second light ray with the refracting surface to the first, writing the distance intercepted on the first light ray as $ v_2t $.

I'm having trouble understanding the reason behind the intercepted distance being $ v_2t $. I know it has got something to do with the the two points on the respective light rays lying on a wavefront, but I cannot fully grasp the reason.

Here is a diagram that Huygens produced (page 35) to illustrate what happens when light is refracted. 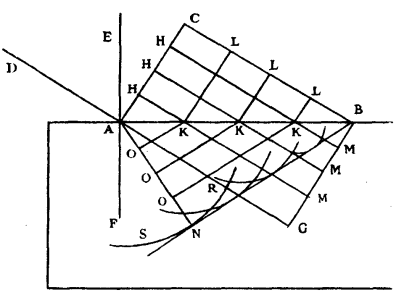 CHHHA represents a wavefront part of which is about to enter the block travelling at a speed $v_1$.

You have two triangles ABC and AOB with a common side AB.

$CB = v_1t$ and $AN = v_2t$ so now Snell's law can be derived in terms of the sines of the appropriate angles and the velocities in the two different mediums.

Not the answer you're looking for? Browse other questions tagged optics refraction huygens-principle or ask your own question.