How can one understand with an example that Newton's law(s) fail in a curved space?

Is it true that Newton's law is not valid in curved spaces? If yes, how can I understand it and explain to a high school student preferably with an example? I tried to think about the motion of a marble placed on an inverted bowl and tried to disprove first law by arguing that it rolls down in a curved path instead of a straight line. But then I realized it is not a force-free motion. Gravity is present. Can we think about motion in curved spaces without forces and disprove first law?

If I understood your question you claim that:

But if that is your point I believe you got things wrong. First and foremost because the example you cite you are talking about curved space and not curved spacetime by the way.

So let's clear this up: Newton's laws hold good in Classical Mechanics. This means that for bodies that are not on the atomic scale and which are moving much slower than the speed of light, you won't find anything wrong with Newton's laws.

The inconsistency between Maxwell's Electrodynamics and Galilean Invariance from mechanics lead Einstein to formulate Special Relativity and the notion that time isn't absolute. This lead later on to the idea of Spacetime by Minkowski.

At the low speed limit of Special Relativity one then recovers Newtonian Mechanics.

Now, a further inconsistency there was, related to gravity. One way to think about it is that in Newtonian Mechanics gravity acts instantaneously while Special Relativity naturaly imposes one maximum speed for one event to influence another: that of light.

So Newton's universal gravitation theory was inconsistent with Special Relativity. This lead to a reformulation of the theory of gravity in the relativistic context - General Relativity.

The key point of General Relativity is this: gravity isn't a force, it is a property of spacetime.

So one then generalizes Newton's first law: in Newtonian Mechanics, in the absence of forces, particles move in the straightest possible trajectory (you can already see that if the particle is constrained to move on curved surface, that it won't be a line, for there is a constraint on the system. It will follow a geodesic of the surface though: the straightest path on the surface).

Since we now think of Gravity as a property of spacetime we generalize this as: freely falling particles (those influenced only by gravity, and hence just by spacetime) follow geodesics on spacetime. And geodesics are the straightest possible paths, but now are throught spacetime and not just through space.

So, there is nothing as disproving Newton's law. It is just all about the domain of validity of the theory and understanding that in a sense, Newton's first law is carried over to GR with important adaptations obviously.

Gravitational lensing of light is probably the most straight forward example of a difference between Newtonian gravity and General Relativity which would seem to get at the distinction you are trying to illustrate. It can also be illustrated very compacting and convincingly with an image of a Einstein Ring such as the following from Wikipedia taken with the Hubble Space Telescope. 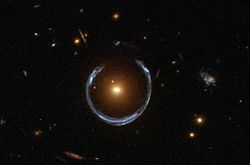 I think there is a little misunderstanding here. It's not that Newton's law (of gravitation) doesn't apply in curved surfaces, it's that Einstein proposed that Newton's law isn't correct and actually everything follows geodesic paths on a curved spacetime. Also, it doesn't say anything about Newton's laws (which are separate from the law of gravitation), so long as you reinterpret "straight line" as "geodesic".

It is also very hard to picture, mainly because it requires a 3+1D curved surface in more than 4 dimensions if you want to actually think about real gravity. Something similar to the bowl and a marble is what most people use as demonstration.

The main idea is of geodesics which generalise straight lines. If we are in flat space then a straight line just keeps going forever. However, if we live on a sphere then a geodesic is a great circle, which comes back to the starting point (much like a perfect orbit).

There are just too many dimensions to keep track of. Even if we throw away 1 space dimension we still have 2+1 = 3D curved spacetime in which our geodesic lives. Reducing to 1D of space and talking about gravity then doesn't make sense. This is why most people end up using marbles in bowls.

Curved space and Newton's laws are not mutually exclusive.

Firstly, as noted elsewhere in comments, General Relativity thinks of gravity as a manifestation of space time curvature, not curvature of space alone. However, that quibble is an aside from your question, because there is definitely spatial curvature in most non-flat solutions of the Einstein Field Equations.

Secondly, Newton's and Euler's laws of motion very much live on in General Relativity. The modern interpretation of Newton's first law is as an assertion of existence of inertial frames, which are defined as frames at rest relative to small rigid bodies (small enough not to disturb the gravitation of the surrounding spacetime) which are free from the influences of force. Motion of point particles is defined by the generalization of the notion of a straight line to non Euclidean geometry, i.e. by geodesics in the curved spacetime. Example: the path of a satellite freefalling around the Earth. A slightly more complicated notion is that of a frame that is "Lie dragged by the vector field exponentiating to the system of geodesics": that is a bit of a mouthful I know and quite technical, but you can think of its defining nonrotational motion in the case where the small body in question is a nonzero extent, rigid body rather than a point mass. Newton's second law generalizes to covariant statements about acceleration relative to geodesics resulting from nett force on a body; Euler's second law analogously is about rotation relative to the Lie dragged frames induced by nett torque. Energy-momentum is locally conserved in General Relativity (i.e. it applies over length/time scales small compared with the reciprocals of the curvature tensor components) and so Newton's and Euler's third laws, formulated in terms of conservation of momentum and angular momentum, also keep their validity.

At last we arrive at Newton's law of gravitation. The issue here is that General Relativity, with its description of gravity as curvature of spacetime as opposed to an instantaneously acting inverse square force, replaces Newton's law as the most accurate predictor of experimental results. However, Newton's law is not logically intrinsically incompatible with notions of curvature in the following sense: one could write down a covariant form of the gravitational Poisson equation (the differential form of Newton's inverse square law) that could hold on a curved manifold. It's simply that, experimentally, we find that such a thing does not predict gravitational behavior accurately if the curved manifold in question is the spatial part of a spacetime solving the Einstein field equations (at least, we can do this over small but nonzero length scales; sometimes space and time do not split into a so called "foliated manifold" globally). Therefore, such a thing would not have a physical interpretation.

Not the answer you're looking for? Browse other questions tagged newtonian-mechanics general-relativity newtonian-gravity spacetime curvature or ask your own question.

8
How can I vizualize and understand curved spaces in general relativity?
0
Post-Newtonian acceleration formula
6
Can space and time separately be curved?
29
Can Newton's laws of motion be proved (mathematically or analytically) or are they just axioms?
2
Why there is a preference between different reference-bodies?
0
Determining the angular velocity from an inertial frame of reference if given a system of two disks stacked