Higgs Boson - What are jets?

I am a machine learning student experimenting with the higgs boson challenge https://www.kaggle.com/c/higgs-boson. I looked through the data and saw that only the PRI_num_jet takes on discrete values.

I have minimal background in physics and was wondering if someone could tell me how these jets are generated. Is it during the decay of the higgs boson ?

More importantly, do the number of jets result in a different decay signature ?

Consider a high energy electron/positron pair annihilation creating a quark/anti-quark pair speeding apart with a high energy. Quarks have a "color charge" of the strong interaction that acts like a spring, the more you move the quarks apart, the stronger they attract to each other (it's more complex, but let's keep it simple). The actual strong force between two individual quarks can be as high as 50 tons.

Force by distance is energy. When the quark and anti-quark are flying apart, their kinetic energy quickly transfers to the potential energy of the strong force between them called a "color string". As soon as this energy becomes sufficient (per $E=mc^2$), more quark/anti-quark pairs are created. On one side, the original quark binds to a newly created anti-quark forming a meson while the new anti-quark keeps flying and assumes the color string on itself. The same process happens on the other side. Instead of mesons, quarks can bind in larger numbers creating various hadrons. This process repeats producing two streams of particles called jets until the initial kinetic energy is all consumed by the production of hardons and mesons. 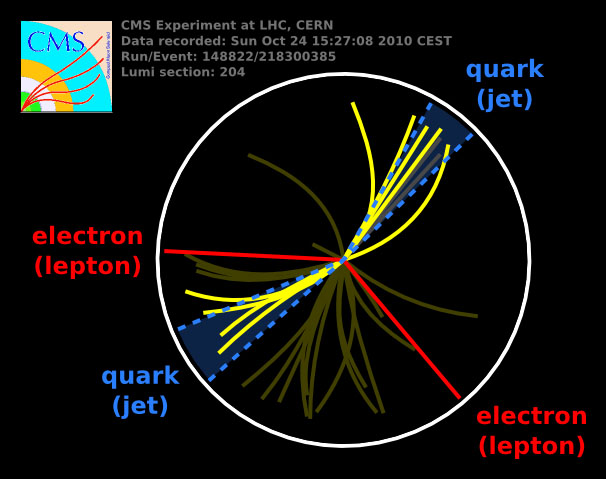 0
What happens if I add a single quark to a system of hadrons?