What causes an electric shock - Current or Voltage?

Though voltage and current are two interdependent physical quantity, I would like to know what gives more "shock" to a person - Voltage or Current? In simple words, will it cause more "electric - shock" when the voltage is high or Current is more?

You'd have to define 'shock', but what kills you is enough current during enough time, not voltage. Of course you need enough voltage to keep the current going over your body's resistance, but it definitely plays a secondary role.

In a former professional life I worked developing Residual Current Circuit Breakers, and 30 mA is the usual rating for devices aiming at protecting lives. In wet environments, such as bathrooms or swimming pools, sometimes 10 mA is recommended.

According to wikipedia's RCCB article, 25-40 ms of 30 mA is enough to send your heart into fibrillation, which probably qualifies as a pretty strong shock. That would require your heart being in the path of the current, though. This link has more information on what to expect depending, again, on the current, not the voltage.

If we model the path for the current through the human body as a resistor, then by Ohm's law, the current and voltage are proportional.

That is, a greater current through the body will be associated with a greater voltage across the body.

Having said that, let's consider the source of the shock. It is the case that sources may produce a large voltage but are not capable or sourcing significant current. These sources are said to have high internal resistance.

So, there really isn't a simple answer to your question other than "it depends".

You see, current in one direction indicates the flow of free electrons in the other direction. Hence, current flows. But voltage does not flow. It's actually the work done per unit charge. (Joule/Coulomb). In other words, it's an energy or simply the potential difference between two points. Sometimes, a bird does not get a shock while resting on a carrier wire (Not all time the bird sits on the same wire). Whereas By touching the live wire and ground, we create a potential difference (a path which is sufficient enough for current to flow) with live wire relative to earth. Hence, we get a shock.

Electric shock is the sufficient amount of current flowing through human body which the person could feel. But, this doesn't mean that shock is not caused by Voltage. Of course, it depends upon voltage which is given by Ohm's law.

You would get a shock, but seriously. (You can't let go off this current.)

Hence, you cannot differentiate a shock based on voltage or current. It depends on both voltage and resistance of your body (which implies current).

Here's a page which shows current paths and another one which provides comparison info.

The shock is the product of the current and the voltage, so in principle you need both. A friction spark from your shoe is high voltage by low ampage, but a shock from a power main is high ampage and comparatively low voltage.

The type of current, whether it is alternating or steady, is also important, as an alternating current will interfere with biological processes more than a steady current. But the energy deposited is the product of the two, so it is not meaningful to separate them out.

It cannot be just voltage as you can demonstrate with a comb!

After a comb has been passed through dry hair it acquires a charge which can be shown by the comb picking up small pieces of paper which are close to it.
The potential of part of the comb relative to the holder of the comb is actually very large and can be thousands of volts.
This can be shown by using a (gold) leaf electroscope as a voltmeter which deflects if the applied voltage is greater than hundreds of volts.
Bringing the charge comb close to the electroscope will give a sizeable deflection.

If the holder of the comb touches the charged end then he/she will not feel a shock the reason being that although the voltage is high the charge on the comb is so small that when transferred to the holder the resulting current is very small.

A small electrostatic generator called an electrophorus when charged and touch can produce a tingling sensation and also sometimes a small spark, in the act of the electrophorus being touched, which can be hear and seen in a darkened room.

Still a high voltage but with more charge transfer, ie a larger current, results in a greater response by the human body.

So it is the current, the result of the applied voltage and the resistance of the human body, (and the time of contact) which determines how the human body reacts.

This table shows the relationship between effect and current although the quoted currents are approximate values. 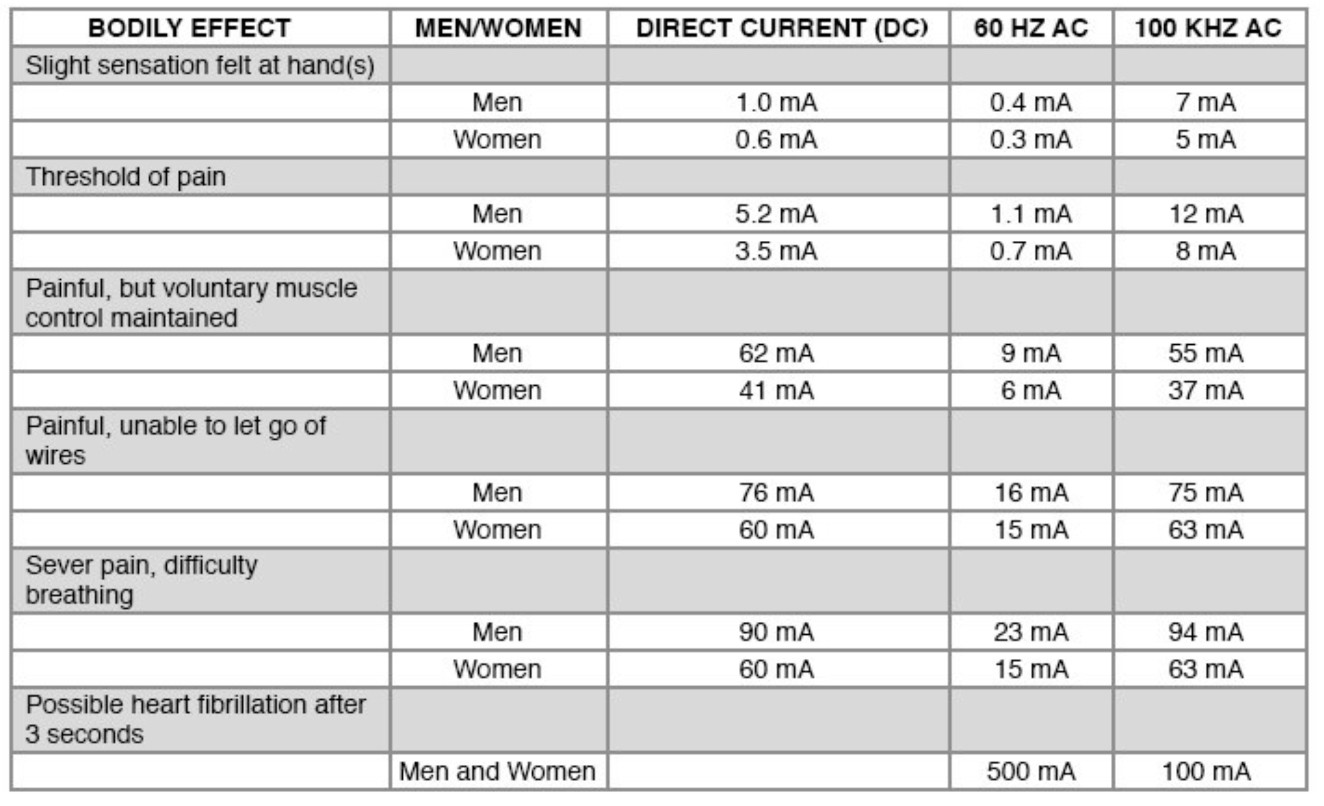 The variability of data is shown by the fact that humans have been electrocuted with a voltage as low as $40\,\rm V$ and at the other extreme a man survived with making an electrical circuit touching a $340\,000 \,\rm V$ transmission line.

The Wikipedia article Electrical Injury gives more information about such matters as does the article The Fatal Current.

Low-voltage high-current exposure will be felt as warming up not as a shock.

the current generates the heat.....but the voltage (potential difference) generates shock...so i think shock is generat due to high voltage!!

Not the answer you're looking for? Browse other questions tagged electricity voltage electric-current or ask your own question.

3
Since voltage determines an electron's energy, why is it current rather than voltage that is harmful?
3
What is fatal? Current or voltage?
2
Relation between voltage and current
0
Why is high voltage lethal?
0
Volts, Amps, and Practical Electrical Knowledge
0
Is 220 V, 50 A equally dangerous for a person as 1A, 11000 V?
-1
Which is responsible for electric shocks: voltage or current?
1
What kills you: Voltage or Electric current?
9
What voltages are used to “safely” shock someone (as in a carnival game)
-2
Can you die from a $250 \, \mathrm V$ broken cable?
See more linked questions

1
What does the current vs voltage graph of a halogen look like?
0
Voltage and Current
0
Which is a correct term-'Voltage shock' or 'current shock' or 'Power shock'?
3
Calculating Electrical Shock 'Danger'
2
Why does more voltage mean more current?
0
Why current drops when voltage increases?